To make a French cheese. 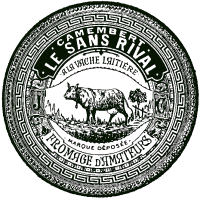 Thank goodness we have a specific day to celebrate Camembert cheese! No, it is not the birthday of Marie Harel - the woman to whom its invention is perpetually attributed in spite of the fairly glaring fact of its existence for at least a century before she was born in 1761.

Today is the anniversary of the day in 1983 that Camembert de Normandie was granted the “Appellation d’Origine Controlle”. The AOC or “term of controlled origin” was superceded by the Protected Designation of Origin (PDO) of Camembert in 1992, which means we can celebrate on that day too. Hell! We can’t have too many days to celebrate Camembert, so lets add in Marie’s birthday anyway (April 28th) – mere facts did not stop a statue being erected in her honour in Vimoutiers (which is also the wrong town anyway, isn’t it? Why is it not in the village of Camembert? Reasons of opportunism and entrepreneurship I’ll bet).

There is one other mildly problematic thing about Camembert - how to determine when it is perfectly ripe for eating? One assumes the French champagne maker, M. Taittinger would know, and his advice is:

Which means that the painter Salvador Dali must have been eating over-ripe Camembert if, as he said, the melting watches in his famous painting “Persistence of Memory” were inspired by a meal of the cheese.

We need a few comforting, certain facts to balance these anxieties, do we not? I can tell you that each 250 gm round of Camembert is made from 2.3 litres of unpasteurised milk from Normandy cows, is ripened by the moulds Penicillium candida and Penicillium camemberti for at least three weeks, then packed in paper and thin plywood boxes before being shipped off to afficionados around the world.

The other incontrovertible fact about Camembert cheese is its firm place in the hearts, minds, stomachs and culture of the French. What other nation would make a cheese such as Camembert part of its ration for its troops, as the French did in the first world war? Not the English, whose troops were decidedly not given Stilton or Wensleydale or any other wonderful cheese, and who certainly at one time in history had a strange idea of what could be included under the heading of “French cheese” ……

Ann Shackleford’s ‘The modern art of cookery improved: or, elegant, cheap, and easy methods, of preparing most of the dishes now in vogue; ... ’ (c. 1767) has a recipe for “cheese” following one for trifle, which turns out to be very appropriate as the “cheese” is actually a custardy dessert.

To make a French Cheese.
Take a gallon of new milk, beat up eight eggs (leaving out four white) strain them into the milk, with a large stick of cinnamon, and the juice of two lemons; sweeten it to your taste, and mix all well together, set it over a clear fire, keeping it stirring till it is ready to boil, then take out the cinnamon; lay a coarse cloth over a pan, and pour it on the cloth; (about four hours will drain the whey from it) press the cheese tight into moulds, of what shape you please; when it is settled, turn it into a china dish and pour this cream over it.

The end of a species.

The camembert with its venison scent defeats the Marolles and Limbourg dull smells; It spreads its exhalation, smothering the other scents under its surprising breath abundance. Emile Zola.
Posted by The Old Foodie at 6:00 AM

GK Chesterton: “The poets have been mysteriously silent on the subject of cheese.”

Voila: www.tastingtoeternity.com. This book is a poetic view of 30 of the best loved French cheeses with an additional two odes to cheese. Recipes, wine pairing, three short stories and an educational section complete the book.

From a hectic life in New York City to the peace and glories of the French countryside lead me to be the co-founder of www.fromages.com. Ten years later with the words of Pierre Androuet hammering on my brain:

“Cheese is the soul of the soil. It is the purest and most romantic link between humans and the earth.”

I took pen and paper; many reams later with the midnight oil burning Tasting to Eternity was born and self published.

I believe cheese and wine lovers should be told about this publication.