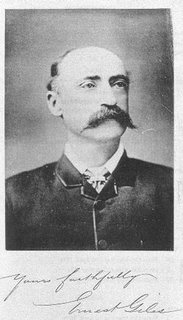 Ernest Giles said of himself “ … though I shall not attempt to rank myself amongst the first or greatest, yet I think I have reason to call myself, the last of the Australian explorers.” He was certainly one of the most determined. Between 1872 and 1875 he led five expeditions into the central and western interiorof the continent, without receiving any official support or reward.

On this day in 1873, on his second expedition, it was the birthday of one of his companions, one William Tietkens. Naturally, the campsite for the night was named “Tietkens’ Birthday Creek”, and luckily a birthday dinner was caught.

“On reaching the camp, Gibson and Jimmy had shot some parrots and other birds, which must have flown down the barrels of their guns, otherwise they never could have hit them, and we had an excellent supper of parrot soup.”

Parrot soup is rarely pronounced “excellent”, except sometimes in situations of extreme explorer-hunger. In fact, documented evidence of parrot-for-dinner in any form is uncommon. Like parrot pie, parrot soup seems to have an existence more mythical than real, and what “recipes” do appear for it are usually in joke form. The Standard Aussie Outback Recipe for Parrot Soup is something along the lines of “place parrot in water with an old boot (or an axe-handle). When the boot (or axe-handle) is tender, throw away the parrot and eat the boot (or axe-handle)”.

Why is parrot-for-dinner uncommon? Are parrots hard to catch (or were Giles’ men terrible hunters)? Are the Angami tribe of Nagaland onto something in disallowing their children from eating parrot flesh for fear that they may develop the birds’ noisy chattery habits? Are parrots really tougher than old boots? Or do they simply taste awful? Have they never been attributed with aphrodisiac qualities?

A parrot-smuggling racket discovered on the India-Nepal border on 2005 was attributed to the demand from Chinese gourmets - suggesting some inherent culinary desirability (or was it the demand of feather fashionistas?). There will always be a proportion of consumers for whom desirability as a food is related to scarcity rather than palatability – a factor, no doubt, in the apparent popularity of flamingo tongues for certain Roman emperors.

There is a recipe for parrot in the ancient Roman collection attributed to Apicius (who is mysterious in his own right) – but the parrot seems an afterthought, an alternative to the perhaps more desirable flamingo.

For Flamingo.
Scald the flamingo [then remove feathers], wash and dress it, put it in a pot, add water, salt, dill, and a little vinegar, to be parboiled. Finish cooking with a bunch of leeks and coriander, and add some reduced must to give it color. In the mortar crush pepper, cumin, coriander, laser root, mint, rue, moisten with vinegar, add dates and the fond of the braised bird, thicken [strain] cover the bird with the sauce and serve. Parrot is prepared in the same manner.

[Slightly adapted from the Vehling translation of Apicius: “Cookery and Dining in Imperial Rome.]

If flamingo and parrot are unavailable, or not to your taste, you can still enjoy the parrot theme with a thoroughly modern cocktail:

Combine ingredients in a shaker filled with ice, shake and strain into a chilled martini glass..

To make a French cheese.

Hunger makes you restless. you dream about food -- not just any food, but perfect food, the best food, magical meals, famous and awe-inspiring, the one piece of meat, the exact taste of buttery corn, tomatoes so ripe they split and sweeten the air, beans so crisp they snap between the teeth, gravy like mother's milk singing to your bloodstream. Dorothy Allison.
Posted by The Old Foodie at 6:24 AM

My goal in life has always been to eat a parrot- so my parents got me some frozen parrot meat for christmas and i am currently researching the best way to cook it. im afaid no one is taking me seriously though

I take your comments very seriously. My dad has put me through very harsh times so I can eat a parrot. BTW do you Cook your parrots grilled or crispy?