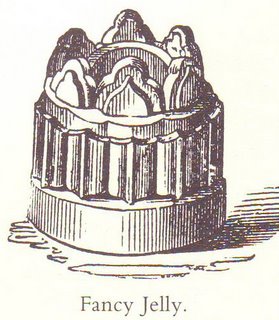 We met Nella Last – the ordinary English housewife with the extraordinary talent for writing about ordinary life in wartime England – in the story of March 22nd .

Today we are inspired by her again.

This day in 1940, early in the war, it was her son Arthur’s twenty-seventh birthday.

“How the years fly! Today has seemed a kaleidoscope of brightly coloured bits of memory – things I never think of in an ordinary life. I asked him last night what he would like best for a birthday tea. He thought very carefully and then said “Orange whip and Viennese bread”. Such a simple wish, and such a boyish one. As oranges with full flavour are difficult to get, and 4d. each, I decided to use Rowntree’s orange jelly. I used the juice of four Jaffas in the old 1d. orange days, and 1d. worth of gelatine which now costs about 4d. for the same quantity. I made the jelly with slightly less water than usual, whipped it when cold but not set, and added three stiffly beaten whites of eggs that I had saved from baking. They did not know it was not made from fresh oranges, and I did not say anything when they said it was the ‘best ever’. My Viennese rolls were a delight and I felt so happy about them, for it’s some time since I made them as my husband does not like either new or crusty bread. They turned out a lovely golden shell of sweet crust that melted in the mouth, and I put honey on the table to eat with them. I put my fine lace and linen cloth on the table, and a big bowl of deep orange marigolds. There was the birthday cake I made before Easter when butter was more plentiful, and for effect I put a boat-shaped glass dish with goldeny-green lettuce hearts piled in – which were eaten to the last bit. …”

A long extract requires a short recipe, so today, from the 1940’s:

Heat a little of the water with the sugar until this has dissolved. Pour 2 or 3 tablespoons of cold water into a basin, sprinkle the gelatine on top. Allow to stand for 2-3 minutes then dissolve over hot, not boiling, water. Blend with the hot sugar and water. Add the rest of the cold water and the fruit squash. Rinse out a basin or mould in cold water, add the jelly and leave until set.

But if you want more than the quota of 400-ish words on the topic, we can go …

Before Rowntree’s flavoured gelatine, there was plain no-frills gelatine in powdered or leaf form, and housewives with children’s parties to cater for have much to be grateful for in that small piece of culinary progress, for before there was gelatine, there was hartshorn. Hartshorn was precisely what it says, the horn of a hart or deer, and it required an incredibly lengthy and tedious process to turn it into jelly, as can be seen from William Rabisha’s seventeenth century recipe for hartshorn jelly. Gelatine is a protein produced by the breakdown of collagen in other animal tissue too, which is why stock made with such things as veal bones and calves feet have a silky – gelatinous - mouthfeel, and why it also can be used to make “jelly” (here we come up against some language barriers – jelly/jam, and jelly/Jello, but you’ll work it out). Hugh Plat’s “Delightes for Ladies … ” (1602 ) has a recipe for “Crystal gelly” made from veal knuckles and calves’ feet, flavoured with spices and rosewater. He also has one for “Gelly of strawberries …etc” made with the fishy version of gelatine – isinglass, produced originally from the swim bladder of the sturgeon, and later from that of the cod.

There are acceptable forms of gelatine and isinglass to fit Jewish and Islamic religious laws, and vegetarians are served by the jelling properties of several vegetable substances (carbohydrates, not proteins) such as agar, carrageenan (Irish moss), and pectin for example. It is deeply comforting to know that no child on the planet need miss out on their party jelly.

Another story about Nella Last is 'An Indifferent Rabbit'.

Children should come to the table clean and in a merry mood; they should not rest their hands on their trenchers, nor drink more than two or three times during the meal; and they should wipe their lips with a napkin after each drink, especially if a common drinking-cup is used. Treatise on Manners published in 1530

Tomorrow: The first pineapple tart.
Posted by The Old Foodie at 6:12 AM

Just last night I saw the Victoria Wood drama called "Housewife, 49" on DVD. And now to find her recipes on your blog. Your blog site is amazing -- detailed and informative and very interesting. I wish all bloggers would take a look and see how it should be done.
Cheers!