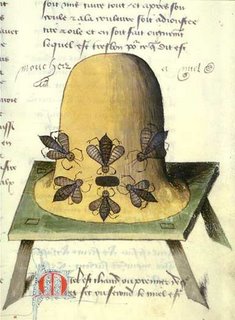 On this day in the year 1230 in Lavagna, Italy, Count Opizzo Fieschi married Bianca dei Bianchi, a Siennese noblewoman. No doubt the marriage was based on the sound political principles of the time, and had the main aim of uniting two powerful territories, but it seems that there was genuine joy too, for the Count ordered a giant cake to be made and distributed to the local people. In 1949, the people of Lavagna started an annual tradition of honouring this occasion by holding a mediaeval festival with the usual music, merriment and mock-battles – and of course a giant cake. Pairs of numbered tickets are sold on "Fieschi's Cake Day", and the game of the day is to find the other person in the crowd with the same number, the reward being a piece of the cake.

Sadly, there are no details of the original cake, but I like to think that the Count honoured his bride by choosing one in the tradition of her home in Siena – in other words, what we would now call panforte. Panforte was already a well established specialty of the area in the thirteenth century, and records show that tenants of the Monastery of Montecellesi were required to pay a tithe of “panpepati e mielati" (pepper and honey bread) in 1205. “Panforte” means hard bread, but it was also called pan pepato or pepper bread (“pepper” being interpreted broadly to mean spice), and pan melato (honey bread).

There do not seem to be any surviving medieval recipes for panforte, but as evidence of the enduring universal appeal of the idea of a candy-cake, I give this Victorian English cookbook version which is spiceless, fruity, and has a meringue-type candy frosting.

Italian Sweetmeat.
Dissolve a pound and a quarter of loaf sugar in half a pint of water. Boil it for fifteen minutes, adding when clear half a wine-glassful of orange-flower water. Take out a quarter of a pint of the syrup to cool. Hold over the boiling sugar a small funnel and drop the stirred yolks (not beaten) of sixteen eggs gradually through, so as to fall in balls; thee when set must be taken out and drained. Bland and pound to a paste twelve ounces of sweet and one ounce of bitter almonds, stir it into the boiling sugar, with two tablespoon-fulls of brandy, simmer till the whole thickens, and rub through a sieve. Shred finely a quarter of a pound of pineapple, half the quantity of angelica, and six ounces of mixed candied peel; put these in layers with the almond paste and egg balls into a buttered pie-dish, and pour over the top the whites of five eggs, beaten to a froth with the cold clarified sugar. Bake in a brisk oven, and turn out carefully. This sweetmeat is better eaten cold. Time to make, an hour. Probable cost, 4s. (Cassell’s Dictionary of Cookery, c. 1870's).

Tomorrow: There is reason in roasting eggs.

Honey comes out of the air … At early dawn the leaves of trees are found bedewed with honey. … Whether this is the perspiration of the sky or a sort of saliva of the stars, or the moisture of the air purging itself, nevertheless it brings with it the great pleasure of its heavenly nature. It is always of the best quality when it is stored in the best flowers. Pliny (A.D. 23-79) 'Natural History'

[The Image of the beehive is from the Gode Cookery site.]
Posted by The Old Foodie at 5:19 AM

What an interesting tradition to revisit!

The cake sounds like it would be very nice. Have you ever made it?

Hello Barbara - thanks for dropping in. I haven't made the cake - although I am going to give it a try this Christmas - it sounds quite Queensland-y and tropical with the pineapple in it. I thought I might add some nuts though - maybe macadamias, to complete the Christmas feel.

What a wonderful tradition - quite romantic really! Really enjoying your blogs - and sharing it with all my friends...much like a good cake!