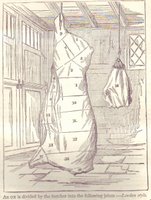 St Bartholomew’s day is a joyous day for foodies, with something, somewhere, for everyone. Bartholomew was supposedly martyred by being flayed alive – which would be an uncomfortable and un-PC association with food to be sure, but it has made him the patron saint of butchers (and tanners). The more interesting food traditions of the day however come via two institutions associated with him – St Bart’s Hospital in London, and the ancient St Bartholomew’s Fair.

St Bart’s Hospital In Sandwich, Kent was funded with the spoils of the final defeat in 1217 of the French by the Cinque Ports (of which Sandwich is one). An annual memorial of the event is still held, and at one time the children present received a “dole” of bread, cheese, and beer. Later this was replaced by a leg race around the chapel for the reward of a currant bun, the adults being given a souvenir “St Bart’s biscuit” – a sort of wafer imprinted with the hospital seal.

As for the fair, it was a tradition in Smithfield (which is also the home of The Worshipful Company of Butchers) from 1133 to 1855. Roast beef and roast pig were the main meaty delights on offer, washed down with copious amounts of ale no doubt, but for the sweet toothed and the littlies, apples dipped in honey – the forerunners of our toffee-apples – appeared for the first time.

Honey appears again – in its alcoholic form – in Gulval, Cornwall, where on this day there is the Blessing of the Mead ceremony. The association with St B is perhaps simply a seasonal one, as it is (or was) with the ancient Printer’s day holiday on this day, which marked the shortening of the days and the need to light candles to work by. The printers received a compensatory payment which was traditionally spent on roast goose (not the candles?).

Fear not, if you do not like beef, pork, goose, apples, currant buns, biscuits or honey. St Bartholomew is, for some reason baffling to myself, the patron saint of Florentine cheese makers, so you could, if you are cheese-inclined on this day, have some good Pecorino to celebrate.

The beef served on this day is traditionally called Bartlemas Beef (Bartlemas = St Bartholomew’s Mass), and the wonderful Hannah Wolley gives the following recipe in her “Cook’s Guide” (1664). She uses “rare” in its sense of “Unusual in respect of some good quality; of uncommon excellence or merit; remarkably good or fine”, and presumably from the instructions, she means us to use salted (“corned”) beef.

To make rare Bartlemas beef.
Take a fat Brisket piece of beef and bone it, put it into so much water as will cover it, shifting it three times a day for three dayes together, then put it into as much white wine and vinegar as will cover it,and when it hath lyen twenty-four hours take it out and drye it in a cloth, then take nutmeg, ginger, cinnamon, cloves and mace, of each a like quantity, beaten small and mingled with a good handful of salt, strew both sides of the Beef with this, and roul it up as you do Brawn, tye it as close as you can; then put it into an earthen pot, and cover it with some paste; set it in the Oven with household bread, and when it is cold, eat it with mustard and sugar.

How to Roast a Swan.

When the stomach is full, it is easy to talk of fasting. Saint Jerome
Posted by The Old Foodie at 5:09 AM