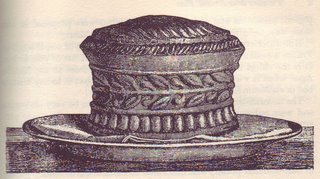 Yes, Yes, I know I promised you a story about the Crimea today, but I invoke my licence to change my mind on a whim. A pie whim. There will be a Crimea story later in the month. Promise.

The Scotsman newspaper carried the following article on this day in 1928:

A HUGE PIE.
The baking of the world’s largest meat and potato pie began yesterday at Denby Dale, Yorkshire. This afternoon it will come out of its oven large enough to supply 20,000 people. Eighty stone of flour and two hundred-weight of lard are in the pie crust, and in the huge steel pie dish are fifteen hundred-weight of potatoes and the beef of six bullocks. Twenty-two picked Denby Dale housewives, declared to be the best cooks in the village, were engaged yesterday stewing the meat, preparing the potatoes, and making the dough for the crust. The pie dish was afterwards wheeled into a specially prepared oven. Denby Dale has had seven famous pies, the first being in 1788. All turned out successful except one, which was baked by professional pie makers. Since then Denby Dale housewives have insisted on baking the pies themselves.

It seems a journalistic lapse to omit the very interesting story about how the Denby Dale pie series began, so here is a summary:

1. 1788: The first pie: made by the village to celebrate the recovery of King George III from madness.
2. 1815: The Victory Pie, to celebrate the defeat of Napoleon at Waterloo.
3. 1846: A pie to celebrate the Repeal of the Corn Laws. Unfortunately the platform holding the 7’10” diameter pie did not survive the onslaught of the eager pie-eaters, and the whole thing got trampled underfoot.
4. 1887: An eight feet diameter, one and half ton pie to celebrate Queen Victoria’s Golden Jubilee. This was the one made by the professionals. Unfortunately the meat was rotten, and the pie was buried in quick lime.
5. 1887: The Resurrection Pie, baked by local housewives, in vindication of their skill.
6. 1896: A pie to celebrate the fiftieth anniversary of the Repeal of the Corn Laws
7. 1928: Another Victory pie, in belated celebration of the end of the war, and to raise funds for the Huddersfield Royal Infirmary.
8. 1964: The Village Hall pie, to raise money for the same, and to commemorate four royal births in the year.
9. 1988: The Denby Dale Bicentenary Pie: 20 ft. long, 7ft. wide and 18 inches deep.
10. The Millennium Pie.

Pie history is replete with other stories of giant pies, but the full explication of these must await completion of “The Pie: A Celebratory History”, which in turn awaits a publisher. Until then I feel quite justified in going hugely over the word budget on the topic of huge pies, so here is a recipe for the famous Yorkshire Goose (Christmas) Pie, from Elizabeth Raffald (1769).

Take a large fat goose, split it down the back and take all the bone out; bone a turkey and two ducks the same way; season them very well with pepper and salt, with six woodcocks. Lay the goose down on a clean dish with the skin side down and lay the turkey into the goose with the skin down. Have ready a large hare, cleaned well; cut in pieces and stewed in the oven with a pound of butter, a quarter of an ounce of mace beat fine; the same of white pepper, and salt to taste, till the meat will leave the bones. Scum off the gravy; pick the meat clean off and beat it in a marble mortar very fine with the butter you took off, and lay it in the turkey. Take twenty-four pounds of the finest flour, six of butter, half a pound of fresh rendered suet, make the paste thick and raise the pie oval; roll out a lump of paste and cut it in vine leaves or what form you please; rub the pie with yolks of eggs and put your ornaments on the walls. then turn your hare, turkey and goose upside down and lay them on your pie with the ducks at each end and the woodcocks at the sides, make your lid pretty thick and put it on. You may make flowers, or the shape pf folds in the paste on the lid, and make a hole in the middle of your lid. The walls of the pie are to be one inch and a half higher than the lid. Then rub it all over with the yolks of eggs and bind it round with three-fold paper and the same over the top. It will take four hours baking in a brown bread oven. When it comes out, melt two pounds of butter in the gravy that came from the hare and pour it through a tun-dish, close it well up and let it be eight or ten days before you cut it. If you send it any distance, close up the hole in the middle with cold butter to prevent the air from getting in.

On Monday: Gooseberries in Grasmere.

A man that lives on pork, fine-flour bread, rich pies and cakes, and condiments, drinks tea and coffee, and uses tobacco, might as well try to fly as to be chaste in thought. Dr. John Harvey Kellogg, Plain Facts for Old and Young (1860-1951)

I guess I shouldn't complain when I have troubles with my crust considering these poor souls were making pie crust for a pie to serve 20,000! Puts things in perspective ...

Now THAT's when pie was pie! Thank you O.F.!