There is reason in roasting eggs. 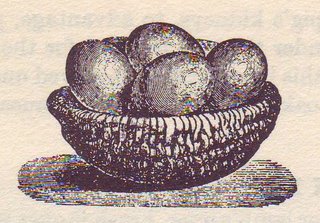 Samuel Johnson and his biographer James Boswell dined at Boswell’s home on this night in 1773, a few days before setting off on their tour of the Hebrides. They had Scottish veal for dinner – although this is incidental to the main topic today, which is eggs, and eggy proverbs.

Boswell added a footnote to his journal entry of the day, relating one of Johnson’s anecdotes:

“ … My definition of man is, ‘a Cooking Animal’. The beasts have memory, judgment and all the faculties and passions of our mind, in a certain degree; but no beast is a cook. The trick of the monkey using the cat’s paw to roast a chestnut is only a piece of shrewd malice in that turpissima bestia, which humbles us so sadly by its similarity to us. Man alone can dress a good dish; and every man whatever is more or less a cook, in seasoning what he himself eats. ‘Your definition is good,’ said Mr Burke, ‘and I now see the full force of the common proverb. “There is REASON in roasting of eggs”.’

The proverb noted by the Whig politician Edmund Burke means that there is a rationale for the most apparently trivial thing - in this case, the cooking of eggs a particular way (if cooking pots are absent and eggs cannot be boiled, then they must be roasted directly on the fire) and this can be achieved by man, but not apes, proving man to be the superior animal.

Considering that at some stage the method had achieved significance enough to warrant its inclusion in a proverb, there is a dearth of actual recipes or even references to this thing called a roasted egg, other than in Boy Scout manuals (no cooking implements needed) or on Jewish tables as one of the highly symbolic traditional foods at the Seder ritual. Nor are there any recipes for a real dish that might underlie that other outdated eggy saying: “I have eggs on the spit”. This means “I am busy and cannot be distracted” – referring to the supposed method of cooking eggs on a spit after they had been hard-boiled, and the yolks removed and spiced-up before being put back into the whites – a job which surely must have needed close attention. The few apparently ancient recipes for these are actually for “mock” eggs which were really meatballs.

Be reassured, a dearth of recipes does not mean a complete absence of recipe inspiration (nearly as good as REASON perhaps?).

Firstly, from : “The Young Housewife’s Counsellor and Friend: Containing Directions in Every Department of Housekeeping, including the Duties of Wife an Mother.” By Mrs. Mary Mason, published by the Protestant Episcopal Church Book Society, New York. 1875.

A recipe shorter than the book title:

To Roast Eggs.
Make a puncture in the large end of the egg, then pour water over it, and cover it in hot ashes in front of the fire, from whence you may easily take it when done.

Secondly, a modern recipe for campers:

Eggs Supreme.
This is a good way of cooking eggs on a spit. With a knife point pick a tiny hole in each end of egg. Push a thin green wood skewer through holes. Place on forks over coals. Cook 10 minutes.

I did toy with the idea of doing a cook-book.... The recipes were to be the routine ones: how to make dry toast, instant coffee, hearts of lettuce and brownies. But as an added attraction, at no extra charge, my idea was to put a fried egg on the cover. I think a lot of people who hate literature but love fried eggs would buy it if the price was right. Groucho Marx.
Posted by The Old Foodie at 6:13 AM

By the way, the anecdote from Samuel Johnson is possibly the coolest thing I've read in over a year.

Isn't he the most quotable of the quotable? I've used him before, and I'm sure I'll use him again.