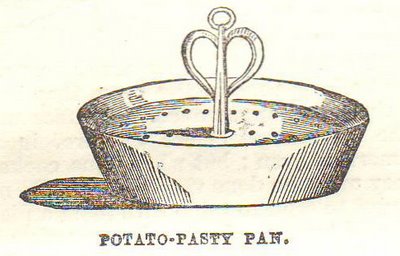 If you haven’t yet met a potato you don’t like, today is a day to celebrate. It was the birthday in 1737 of Antoine-Augustin Parmentier, the French agriculturalist and apothecary who did more to popularise the potato in Europe than any other single individual in its history.

Parmentier joined the army in 1757, and spent several years as a prisoner of war in Germany. The mainstay of the prison diet was potatoes, and one would think that one would never want to see a potato again after that experience, but it made Parmentier realise the nutritional value of a crop at that time seen as only fit for pigs – and prisoners.

After his return to France in 1763, Parmentier had to work hard to promote the potato in the face of opposition from scientists (who said it caused leprosy), the clerics (that it provoked lust, and anyway was a Protestant vegetable), and the gourmands (it was tasteless, indelicate, and flatulent). Some poor wheat harvests helped his campaign, but in the end he succeeded with methods well-known today – making it appear covetable, and arranging celebrity endorsement. The first he achieved by having some trial plantings in the garden of the Palace of the Tuileries appear valuable by having them guarded heavily - by day only, thus ensuring the theft of plants at night. The second he did by managing to persuade Marie Antoinette to wear a posy of potato flowers in her bosom, and by hosting grand dinners with the likes of Benjamin Franklin in attendance, at which all courses from soup to liqueur were based on potatoes.

In addition to his agricultural work, Parmentier - perhaps in remembrance of his own childhood as an orphan - had a highly developed social conscience for the time. Louis XVI supposedly said “France will thank you some day for having found bread (ie potatoes) for the poor”, and Parmentier actually did open up soup kitchens to feed the poor of Paris. It is fitting then that the dish most associated with him is potato soup, of which, of course, there are many variations.

Here is a very rich and regal version, from Queen Victoria’s chef, Francatelli.

Potato Soup à la Crème.
Cleanse, peel, wash, and slice up, about twenty large-sized good potatoes. Put them into a stewpan with one large onion, and one head of celery – also sliced up; add four ounces of fresh butter, a little pepper, salt, and grated nutmeg; set them to simmer on a slow fire, stirring them occasionally until they are nearly dissolved into a kind of purée. The add to them three pints of good white consommé, and having allowed the potatoes to boil gently by the side of a moderate fire for half an hour, pass them through the tammy, and having removed the purée into a soup-pot, add, if requisite, a little more consommé, and set the purée on the fire to boil gently by the side of the stove, in order to clarify it in the usual manner required for other purées of vegetables. Just before sending to table, add a pint of boiling cream, a pat of fresh butter, and a little pounded sugar. Serve the fried crusts with this soup. (The Modern Cook; 1860)

As a special gift on Parmentier’s birthday, I give you the recipe which explains the image at the top of today’s post. The recipe is repeated in a number of Victorian cookbooks, and is an example of the Victorian love of kitchen and table gadgetry. This version is from Mrs. Beeton (1861)

Potato Pasty.
INGREDIENTS: 1 ½ lb of rump-steak or mutton cutlets, pepper and salt to taste, 1/3 pint of weak broth or gravy, 1 oz. of butter, mashed potatoes.
Mode: Place the meat, cut in small pieces, at the bottom of the pan; season it with pepper and salt, add the gravy and butter broken into small pieces. Put on the perforated plate, with its valve-pipe screwed on, and fill up the whole space to the top of the tube with nicely-mashed potatoes mixed with a little milk, and finish the surface of them in any ornamental manner. If carefully baked, the potatoes will be covered with a delicate brown crust, retaining all the savoury steam rising from the meat. Send it to table as it comes from the oven, with a napkin folded around it. Time. – 40 to 60 minutes. Average cost, 2s. Sufficient for 4 or 5 persons. Seasonable at any time.

Even Further Above and Beyond ..

If you still have not had enough in the way of historic potato recipes, you can go to the Companion story "Fun with Potatoes".

I appreciate the potato only as a protection against famine; except for that I know of nothing more eminently tasteless. Brillat Savarin.
Posted by The Old Foodie at 5:47 AM

What a wonderful co-incidence you posted about Francatelli. I was looking at his little book this week.

I am about to do a series of cookbook posts because I am in mourning for a "Food in History" course which was cancelled at the last minute. I might have to start with Francatelli and potatoes!

I saw in your blog that the course had been cancelled - how come? all that preparation for nothing. Will you hold it again? Enjoy Francatelli in the meanwhile. J

I don't know if I'll offer it again soon. There were enough students ... and then there weren't. I need to think about it. I *want* to hold it because I have done all the preparation and because it is an adorable subject. In my dreams I have an extended version which includes Blitz cooking and US colonial cooking. Maybe one day.

In the interim, at least my Medieval Women students are dead-keen on including food in their course. Each of them has taken recipes home and we will eat while learning for the next five weeks.