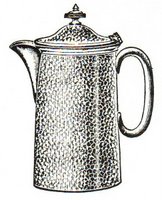 The prolific French writer Honore de Balzac died on this day in 1850 at the ripe young age of 51 years, the cause, it is said, being caffeine poisoning from the enormous quantities of coffee he consumed.

Depending on the source of the information, Balzac’s fifteen-hour writing days and prodigious output were enabled by 20 to 40 cups of coffee a day, and it is clear from his famous essay “The Pleasures and Pains of Coffee” that he was intimately acquainted with addiction and withdrawal. He describes in it a “horrible, rather brutal method” of eating the coffee grounds themselves when the drink is no longer sufficiently stimulating.

“ … sparks shoot all the way up to the brain. From that moment on, everything becomes agitated. Ideas quick-march into motion like battalions of a grand army to its legendary fighting ground, and the battle rages. Memories charge in, bright flags on high; the cavalry of metaphor deploys with a magnificent gallop; the artillery of logic rushes up with clattering wagons and cartridges; on imagination's orders, sharpshooters sight and fire; forms and shapes and characters rear up; the paper is spread with ink - for the nightly labor begins and ends with torrents of this black water, as a battle opens and concludes with black powder.”

The sketchy details of his health and death do suggest he had heart failure, and if the legendary tales of his gluttonous eating are true, a cardiac death would hardly be surprising. One often-quoted (but impossible to substantiate) story is that he once sat down to a meal of one hundred Ostend oysters, twelve lamb cutlets, one duckling with turnips, two roast partridges, and two plates of Sole à la Normande – followed by fruit and accompanied by “copious quantities” of wine, liqueurs, and of course coffee.

Balzac himself would surely have scorned the use of coffee as anything other than a straightforward stimulant, but it was starting to be used in sweet dishes, as in the following elegantly striped coffee and almond gelatine dessert from the book of his contemporary, Baron Brisse (1868).

It is known that the good Baron never actually cooked himself, and this is obvious from the recipe, for he would have realised that this striped coffee and almond gelatine dessert would never freeze, and he would have stressed that one layer would have to be allowed to set before the next one was carefully poured on top.

Coffee Blancmange.
Toast a quarter of a pound of coffee-berries, grind, and put them in a tumblerful of boiling water, leave until the grounds have settled at the bottom of the tumbler, pour the clear coffee into a bowl, and add half a pound of sugar and half an ounce of dissolved gelatine. Pound one pound of sweet almonds in a mortar, add three tumblersful of water, and squeeze the whole through a cloth; pour half of this liquid onto the coffee, and stir the other half into half a pound of sugar and a quarter of an ounce of gelatine, which have been dissolved in a tumblerful of warm water. Place a mould in a pailful of ice and pour in alternate layers of coffee and milk of almonds as they freeze.

There is a goodly number of historic recipes using coffee as an ingredient in the Coffee Recipe Archive, should you be interested.

Never drink black coffee at lunch; it will keep you awake in the afternoon. Jilly Cooper, 1970, How to Survive from Nine to Five

Hi there,
My name is Nicole and I'm writing from Saveur magazine. Is it possible to ask your source on Balzac's daily coffee consumption of 20-40 cups? Any help would be much appreciated.

Hi Nicole -I will try to get back to you on this but am just catching up after a hard-drive failure!
Janet

Honore de Balzac consumed daily about 40 cups of coffee? That is a large amount, but, didn't most Europeans drink their coffee out of a cup about 1/2 the size of an American-size cup of coffee?

But, even 20 cups is a large amount of caffeine for anyone!