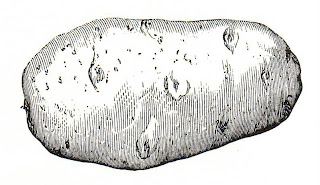 The problem with many early recipes (16th – mid 18th centuries) is being sure what is meant by “potato” as often sweet potato was intended, and the earliest known written recipe for “Earth Apples” (German, 1581) is now thought to refer to a type of squash.

The following recipe seems to clearly mean Solanum tuberosum, and is an interesting cook-in-a jar method.


To make a Potatoe Herrico.
Scrape the skin clean off four pounds of good raw potatoes, then wash them clean; take two pounds of beef, one of mutton, and one of pork; or, as you like best, four pounds of any of these meats; cut them into pieces of three or four pounds each, season them very well with pepper and salt, and a good onion chopped very small; have ready a strong wide mouthed jar such as hares are usually jugged in; slice a thin layer of the potatoes into the jar, then a layer of the seasoned meat over them, and so alternately layers of potatoes and meat; let your uppermost layer be potatoes, so that your jar be about three quarters full, but put no water into your jar; then close or stop the mouth of it with a large well-fitted cork, covering the same with a strong piece of canvas, and tying it down with pack thread, so as only a little of the steam may escape in stewing; for a little should constantly evaporate from the sides of the cork to save the jar from bursting. Then place your jar up right in a kettle of cold water on the fire, so as the mouth of the jar may be always two inches above the water in the kettle, when boiling. The herrico in the jar will begin to boil some minutes sooner than the water in the kettle, and that for obvious reasons. In about an hour after the water in the kettle begins to boil, your herrico will be fully stewed. Then take out and open the jar, pour out the herrico into a deep dish, and serve it up.
[Taylor, E, “The lady’s, housewife’s, and cookmaid’s assistant: or, the art of cooker, explained and adapted to the meanest capacity … ”; 1778]

If you don’t have a jar to cook your spuds in, you could try cooking them in a paper-bag, as promoted by Nicolas Soyer, the grandson of Alexis Soyer, and author of “Paper Bag Cookery” (1911).

New Potatoes.
Peel, halve and put sufficient in a paper-bag for three persons with three tablespoonsfuls of cold water. Add one leaf of mint and a little salt. Seal up bag. Place gently on the broiler. Allow 30 to 35 minutes in hot oven. All potatoes should be cut in two.


Baked Potatoes.
Thoroughly wash twelve good sized potatoes. Make a few small slits in them but do not peel. Place in a paper-bag with one tablespoonful of water. Cook for 35 to 40 minutes, according to size.


Potatoes Chateau.
Peel and blanch two dozen small potatoes and drain well, Put htem in a bag and add two ounces of butter. Seal up and bake in a very hot oven for 35 minutes. Place on a very hot dish, season to taste, and serve.

Potatoes Paysanne.
Cut half-a-dozen good-sized peeled potatoes into large dice; parboil for a minute or so. Place in a paper-bag and add a chopped onion, four ounces of ham finely diced, and two ounces of butter. Seal up and bake for 30 minutes.

Potatoes Mâitre d’Hotel.
Cut up six cold boiled potatoes, place in a well buttered bag, add half a glass of milk, salt and pepper, an ounce of butter, a little chopped parsley, and grated nutmeg. Cook for 15 minutes.

You don’t have to buy a Potato-Man kit to have fun with potatoes, some recipes sound like fun just on account of their names.

Surprise Potatoes.
Wash some large potatoes, but do not peel them; cut a small piece off the top and scoop out the centre; fill with sausage meat; replace the lid and bake in rather a hot oven from one to one and a half hours; a slice should also be cut from the bottom part of the potatoes, that they may stand flat on the dish.
[From: “The Day by Day Cookery Book”; Mrs A.N. Whybrow; 1900]

Potatoes for Pilgrims.
(a Trappist recipe).
Boil six or eight potatoes, and cut them in slices. Make a little frying batter, and dip in it half a dozen onions thinly sliced; fry these in hot fat, and when they are browned, put the potatoes into the pan with them. Pour over them as much milk as will barely cover them. Sprinkle powdered sugar upon them, let them stew gently a short time, and serve very hot. Time to stew, five or six minutes. Probable cost, 8d. Sufficient for four or five persons.

Frying batter.
To four ounces of flour add a gill of lukewarm water, a pinch of salt, and two-tablespoonfuls of salad oil. Let the mixture stand awhile, and, before using, dash in the whites of two eggs whisked till firm.
[Cassell’s Dictionary of Cookery; 1870’s]

Potato Snow
The Potatoes must be free from spots, and the whitest you can pick out; put them on in cold water; when they begin to crack, strain the water from them, and put them into a clean stew-pan by the side of the fire until they are quite dry, and fall to pieces; rub them through a wire sieve on the dish they are to be sent up in, and do not disturb them afterwards.
[Kitchiner; Cook’s Oracle; 1845]


Shoo-fly Potatoes.
There is a machine which comes for the purpose of cutting shoo-fly potatoes; it costs two dollars and a half. The potatoes are cut into long strips like macaroni, excepting that the sides are square instead of round. They are thrown into boiling lard, sprinkled with salt as soon as done, and served as a vegetable alone, or as a garnish around meat. (1878)
[Story of July 4th 2006]

Potatoes are the most versatile of vegetables, suitable for your guests whichever stratum of society they represent.

Potato Pie.
Slice up four onions and boil them in a saucepan with two ounces of butter, a quart of water, and pepper and salt, for five minutes; then add four pounds of potatoes, peeled and cut in slices; stew the whole until the potates are done, and pour them into a pie-dish; cover this with stiff mashed potatoes, and bake the pie of a light colour.

For the Middle Class, from the “Middle Class Cookery Book”, The Manchester School of Domestic Economy and Cookery, 1903


Pommes de Terre à l’Anna.
Two pounds of Potatoes; two ounces of grated Cheese; one and a half ounces of Butter; Salt and pepper; one teaspoonful of chopped Parsley.
Butter a plated dish, peel the potatoes and cut them into rather thin slices. Lay these slices in close even rows on the dish, and sprinkle over them the cheese, salt, pepper, and parsley; put a piece of butter here and there on the top, and bake in a moderate oven for an hour and a quarter.

Mix two cupsful of hot mashed potatoes, one teaspoonful of chopped onion, one tablespoonful of chopped parsley, two tablespoonfuls of butter, salt and pepper to taste, then shape them into small balls, open the center and put in some popped corn – Nelson’s makes the crisp and flaky grains – place on a buttered dish and cook in a moderate oven a quarter of an hour, sprinkle ground popped corn over them before removing from the oven, and serve alone or with tomato sauce.

Potato recipes that appear in other stories are:

Email ThisBlogThis!Share to TwitterShare to FacebookShare to Pinterest
Labels: potatoes

my Grandmother Whitman a Nova Scotian ( originally from Mass.) used to make Potato Candy - to a med boiled mashed potato add 3 cups icing sugar and almond flavoring, put into pan and cover with bitter choc. reminds me of marzipan a wee bit. she was a farmer and mother of 10 - so not a lot of money in the early 20th C!