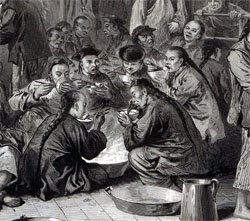 A very important Chinese-American event happened in New York on this day in 1896. Contrary to popular myth however, this was not the invention of ‘Chop-Suey’.

What is Chop-Suey anyway?

According to the OED, the phrase is derived from the Cantonese shap sui, meaning “mixed bits”, and was first recorded in print in 1888 with the definition “A staple dish for the Chinese gourmand is chow chop svey [sic], a mixture of chickens' livers and gizzards, fungi, bamboo buds, pigs' tripe, and bean sprouts stewed with spices”. By 1904 the first clarification of the ethnicity of the dish came in another newspaper: “One of the Chinese merchants of New York … explained that chop suey is really an American dish, not known in China, but believed by Americans to be the one great national dish of the Celestials.”

Between these two dates is our Chinese-American event. On this day the Viceroy of China, Li Hung Chang ("the man … who, the Chinese say, is the real Emperor of China") was entertained at a dinner at the Waldorf. The main purpose of his visit to the USA was to win support for China’s conflict with Japan, but there was almost as much interest in the Viceroy’s strange eating habits. Not only was he skilful with chopsticks (!), his own cooks prepared his food – even at the Waldorf.

"For the first time in the history of the Waldorf, Chinese chefs have prepared Chinese dishes in Chinese pots, pans, and skillets. And the dishes they have cooked have created more curiosity and consternation than the presence of the great Viceroy himself.”

“Other Chinese might tempt fate by consuming strange viands placed before them, but Earl Li, who has escaped safely from the plague, famine, rebellion, and the bullet of a Japanese assassin, would not risk such an experiment.”

The dish called 'Chop Suey' was most certainly not created on the day for the local dignitaries, who were as unwilling as their guest to tempt fate by consuming strange viands, but instead were served a menu that was elegant but simple:

Chop-suey rapidly lost its ‘strange viand’ status, and within less than two decades recipes for it appeared in American cookbooks, and it was certainly on menus of the St Francis Hotel in San Francisco in 1919.

The ‘Chinese-Japanese Cook Book’ (c1914) had several recipes for chop-suey.

Duck Chop Suey.
Three or three and one half pound duck; one tablespoonful of duck fat; one and one quarter tablespoonfuls of soyu; dash of cayenne pepper; two teaspoonfuls of salt; one cup of dried mushrooms; one bunch of celery; one half cup of small white onions; one dozen lotus seeds; one can of bamboo shoots; two pounds of bean sprouts.

Carefully wash the duck and remove the bones, then wipe dry and pound the meat until tender. Then chop up about a tablespoonful of duck fat, and fry. Remove all lumps of fat, leaving only the clear oil, and put in the duck meat, cut in small pieces. Fry to a golden brown. Add one and one half tablespoonfuls of soyu, a dash of cayenne pepper, and half a tablespoonful of salt. Cover, and let simmer for twenty minutes while preparing the following: Wash and soak for ten minutes one cup of dried mushrooms, pulling off all stalks and cutting small; cut up a bunch of celery small, and add a cupful of small white onions. Slice a dozen lotus seeds very thin, and half a can of bamboo shoots. Put all in with the duck and fry ten minutes; then add two pounds of bean sprouts and cook five minutes longer. Serve with rice.

We (the Chinese) eat food for its texture, the elastic or crisp effect it has on our teeth, as well as for fragrance, flavor and color. Lin Yutang
Posted by The Old Foodie at 5:51 AM