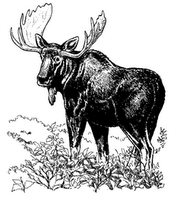 Thoreau was equivocal about moose. He thought they were ugly but magnificent, and although he ate moose-meat several times himself (“It tasted like tender beef, with perhaps more flavor, - sometimes like veal”) he felt guilty about their “murder”, and sad “as it affected the innocence, destroyed the pleasure of my adventure”.

On this day in 1857, during his third trip into the Maine woods, he noted in his journal:

“The Indian was quite sick this morning with the colic. I thought that he was the worse for the moose-meat he had eaten”.

The moose is the largest member of the deer family, weighing in at up to 1,600 pounds (727 kg), which translates to about 650 pounds (nearly 300 kg) of pure meat, which is an awful lot of venison however you look at it. As a missile coming through the windscreen of a car, it is usually a fatal amount of venison for the driver as well as the moose, but unfortunately (for both) this appears to be an increasing problem. It certainly represents a spectacularly large amount of road kill to dispose of, or protein going to waste, when it does happen.

The local authorities in Vermont and Alaska have devised an interesting solution (for humans, not moose) for this problem. Volunteers (or prisoners in Alaska) collect and butcher the meat, and pack it for delivery to charities that feed the needy. Nowadays the surplus bounty is frozen, but in earlier times it would have been dried, as described in “The Trapper’s guide, a manual of instructions …..” a Canadian publication from 1867:

Jerked Meat.
If you have the fortune to kill a deer or moose in warm weather, and have an over-supply of meat that is likely to be tainted, you can preserve it by the following process: Cut all the flesh from the bones in thin strips, and place them, for convenience, on the inside of the hide. Add two or three quarts of salt for a moose, and a pint and a half for a deer, well worked in. Cover the whole with the sides and corners of the hide to keep out flies, and let it remain in this condition about two hours. Drive four forked stakes into the ground so as to form a square of about eight or ten feet, leaving the forks four feet high. Lay two poles across one way in these forks, and fill the whole space the other way with poles laid on the first two, about two inches apart. The strips of flesh should then be laid across the poles, and a small fire of clean hard wood should be started underneath, and kept up for twenty-four hours. This process will reduce the weight of the flesh by more than half, bringing it to a condition like that of dried or smoked beef, in which it will keep any length of time. This is called jerked venison. It is good eating, and always commands a high price in the market.

Until the lions have their historians, tales of the hunt shall always glorify the hunter. African Proverb.

I got my moose three weeks ago - 850 lbs yielded 460 lbs of meat. We had 25 lbs made into hot sausage, then the rest of it into steaks, roasts, stew meat and hamburger. I made the most delectable moose cacciatore, and also a pot roast to die for. Two out of our five kids absolutely refuse to eat the meat, and have even become paranoid, thinking I'm sneaking moose meat into everything I cook. You should see the hunched up shoulders and shifty eyes - "there's no moose meat in this, is there??" So far I haven't snuck anything by them. I'm waiting until they've let their guard down.

Hello Gammer,
What have your kids got against moose? I guess you cant sneak it into chocolate cake, can you?