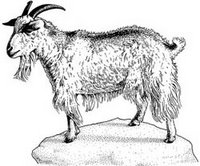 In July 1846 the young Australian explorer John Horrocks set off with five companions, a number of badly behaved goats and a single ill-tempered camel, to explore the northern part of South Australia. On this day in 1846 the worst-behaved goat was punished by execution, and thereby provided dinner for the party.

Apart from their occasionally tricky behaviour, goats are enormously useful to humans: small enough to be manageable, able to live off the most unpromising land, and producing good milk as well as meat. They are in many ways the ideal animal for survival situations, so much so that once upon a time, ships’ masters would leave them on deserted islands, knowing they would be fruitful and multiply, providing sustenance for shipwrecked sailors – as they did for the “real” Robinson Crusoe”. They were brought to Australia with the First Fleet in 1788, and it would be an understatement to say that they thrived, as the feral descendants of those early goat-settlers now number somewhere between 2 and 3 million, and represent a huge environmental threat.

As for “Harry” the camel, from an auspicious beginning as the first of many camels imported as pack animals to serve the expanding settlements, exploratory expeditions, and railroad construction industries, he met an untimely end by causing the same in his master. Harry was said to be an irritable animal, which perhaps is bad publicity perpetrated by the witnesses for he surely did not deliberately jostle his master on that fateful day just as Horrocks was loading his gun to shoot at a bird. The discharge from the gun shot away part of Horrocks’ right hand and face, and he died 23 days later. Harry, for his sins, was also executed.

Many more camels were imported to Australia over the second half of the nineteenth century, and half to one million of their descendants now form the only significant population of wild camels in the world. As with goats, they compete with pastoral and native animals for fodder, and are a significant environmental problem. There are culling operations in force in many states, but strangely for this home-grown protein, the meat is exported, which is why you never see camel stew on the menu of your favourite Australian restaurant.

The very first Australian cookbook – Edward Abbott’s “English and Australian Cookery Book: Cooking for the Many as well as the Upper Ten Thousand” (1864) was a resounding failure, as we have discussed previously. Not all of his recipes were as outlandish as “Slippery Bob”, and he has no recipe for camel meat, but this one fits our theme today:

Roast Kid.
This is very good eating. It is in great request on the Continent of Europe. Put a quarter down to roast, and let it be well browned; serve with gravy, slices of bacon, and some veal stuffing balls. It is more tender than lamb.

The Pot au Feu of Scotland.

The History of every major Galactic Civilization tends to pass through three distinct and recognizable phases, those of Survival, Inquiry and Sophistication, otherwise known as the How, Why and Where phases. For instance, the first phase is characterized by the question How can we eat? the second by the question Why do we eat? and the third by the question Where shall we have lunch? .
Douglas Adams, The Hitchhiker's Guide to the Galaxy, 1980