The End of a Species. 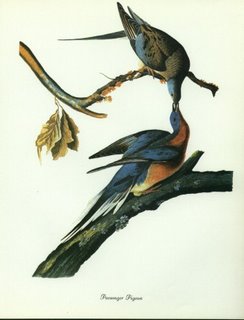 Today, September 1st
We humans have hunted and eaten and otherwise destroyed a lot of other species over the millennia, but only for a few*do we have an exact date on which to remember our shame. On this day in 1914, Martha, the last Passenger Pigeon died in the Cincinnati Zoo, aged 29 years. In a little more or less than three hundred years, a bird which was once the most abundant on earth, making up perhaps as much as 40% of the bird population in North America was gone by way of pigeon pot pie and other delicacies. Their fault was that they were not only delicious, they were easy to catch, in the nest or on the wing.

The story of the passenger pigeon (Ectopistes migratorius) is one of numbers and images almost too big to get the imagination around. One colony in Wisconsin in 1871 had an estimated 136 million birds covering an area 75 miles long and 10-15 miles wide, and it was by no means the largest recorded – some were estimated to contain 2 billion birds. The pigeons’ breeding and nesting habits made them easy prey for humans, but they could also be clubbed from the air as great flocks flew overhead, darkening the sky for hours on end.

The 1870’s was crunch time. The last great hunt took place near Petosky, Michigan in 1878, when hundreds of hunters surrounded a five mile square breeding forest, and over thirty days slaughtered one billion pigeons for shipping to markets in the east. Conservationists were already getting alarmed, but by the time protective legislation was passed in Michigan in 1897 it was too late. The last known wild bird died in 1900.

It is impossible not to blame the rapacious appetites of wealthy city folk for the end of the pigeons. Large scale professional trapping to supply the demand for the tasty birds in the cities of the east did what Indians and settlers and small townspeople had failed to do over the previous centuries, by enabling destruction on a scale from which it was impossible to recover. The pigeons were a delicacy on the tables of the best restaurants, and in the tradition of late nineteenth century fine dining, the more elaborate the recipe the better. There is no better example of extravagant, elegant late nineteenth century dining than the famous Delmonico’s of New York, and Charles Ranhofer certainly used his share of pigeons in his establishment.

Charles Ranhofer’s book “The Epicurean … “ (1894) is a magnificent record of just how complicated and labour-intensive food preparation can be when time and money are no object, and the tastes of the era demand it. I have chosen a recipe for stuffed pigeons which requires the prior preparation of almost 20 other elements such as stocks, sauces, garnishes, and forcemeats.

Pigeons Garnished with Montglas Cases, Stuffed.
Fasten a wooden foundation on a dish, it to be one inch high and not too wide; cover with cooked paste (No. 131) or noodle paste (No. 142) decorated on the top with a piping in relief and having a wooden or tin triangle or conical-shaped support in the center, also covered with paste and bored on top so that a skewer can be inserted. Bone the breasts of three young, clean pigeons by splitting them lightly through the back, but leaving the legs and thighs attached to the bodies; season the inside meats and fill the breasts with baking liver forcemeat (No. 81) combined with a third as much raw forcemeat (No. 89), a few spoonfuls of cooked lean ham and as much cooked truffles, all to be well chopped; sew up the back, truss as for an entrée (No. 178) with the legs thrust inside the body, bard over and wrap each one in a small buttered cloth, then cook in a good poêler stock. As soon as the pigeons are done, drain, unwrap and retighten the cloth more firmly; put them back into their stock to leave cool, then drain again and when unwrapped, wipe them carefully with a cloth. Now detach the breasts from the rump of each pigeon to cut into lengthwise slices, return them to their original position and then place the birds in a sautoir with a part of their stock reduced to a half-glaze warm them in the open oven basting frequently. Remove the pigeons to a small baking sheet, smooth the cut parts nicely and cover the breasts with a not too thick Mornay sauce (No. 504), so the form of the pigeons remain intact; place them for a moment in the hot oven to have the sauce adhere, then dress them at once in a triangle almost standing upright against the support; on top of this insert a small skewer garnished with truffles; surround the bottom of the dish with a chain of small china cases filled with Montglas (No. 747), then covered with a layer of forcemeat and poached in a bain-marie; when serving this entrée send also a sauce-boatful of the reduced pigeon stock thickened with a little sauce.

"No pains have been spared to render it one of the most comfortable in the city, and persons in search of a permanent home, as well as strangers merely passing by, will find all their wants attended to with the strictest attention." Stated at he public announcement of the opening of the Delmonico Hotel premises at 25 Broadway in 1846.
Posted by The Old Foodie at 5:45 AM