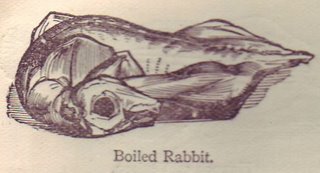 A Melbourne journalist made a serious grammatical error on this day in 1862 in reporting a bill of fare which “included leporine, which is betwixt a hare and a rabbit”. There is no such hybrid animal as a leporine – it is not the mule of the bunny world. The word is not a noun at all, it is an adjective meaning “pertaining to a hare or hares; of the nature or form of a hare”. Many similar adjectives pertaining to animals are in common use, or at least easy to guess - such as bovine, porcine, piscine, assinine and feline - but in case you feel inclined to some adjective-dropping, here is a small selection of lesser known ones appropriate for food situations:

One small issue is that the word “leporine” also pertains to rabbits, perhaps because lexicographers, like most of the rest of us, are not sure of the difference between rabbits and hares. I am reliably informed that hares are generally larger, have longer hind legs and longer ears, and that some of the more subtle lifestyle differences are as follows:

Rabbits: the young (called kittens) are born naked, blind, and helpless; the fur does not change colour during the year; they are social, live in underground burrows, and escape by hiding.

Hares: the young (called leverets) are born furry, eyes open, and active; the colour of the fur becomes lighter in winter; they are solitary, stay above ground, and escape by running.

There is also difference in culinary status, hares usually being considered rather more upper class than rabbits, as evidenced by numerous cookbook writers such as Hannah Glasse, who included recipes such as “To roast a Rabbit, Hare fashion” (1747), but never the opposite.

Since we are discussing the subject of rabbits and hares, it seems opportune to clarify one of the most mis-quoted and mis-attributed culinary quotations of all time. Isabella Beeton did not, ever, begin any recipe with the phrase “first catch your rabbit”. Neither did Hannah Glasse, to whom it is also sometimes attributed. Hannah did however start her recipe for roast hare with “take your hare when it is cas’d” – that is, skinned. Naturally this is our recipe for the day.

To Roast a Hare.
Take your Hare when it is cas’d and make a Pudding; take a Quarter of a Pound of Sewet, and as much Crumbs of Bread, a little Parsley shred fine, and about as much Thyme as will lie on a Six-pence, when shred; an Anchovy shred small, a very little Pepper and Salt, some Nutmeg, two Eggs, a little Lemon-peel: Mix all this together, and put it into the Hare. Sew up the Belly, spit it, and lay it to the Fire, which must be a good one. Your Dripping-pan must be very clean and nice. Pour two Quarts of Milk and Half a Pound of Butter into the Pan; keep basting it all the while it is roasting with the Butter and Milk till the Whole is used, and your Hare will be enough. You may mix the Liver in the Pudding, if you like. You must first parboil it, then chop it fine.
[The Art of Cookery Made Plain and Easy, 1747]

A pasty costly-made,
Where quail and pigeon, lark and leveret lay,
Like fossils of the rock, with golden yolks
Imbedded and injellied.
Alfred, Lord Tennyson, Audley Court (1842)
Posted by The Old Foodie at 5:47 PM

Hi Old Foodie,
This hare recipe actually sounds quite delicious. Question, is rabbit/hare popular to eat in Australia? (Please excuse me if this is a really stupid question.) I've never had hare, though we can get rabbit occasionally at certain stores. When my dad was a kid he used to hunt rabbits to bring home to his mother to cook, squirrels too. But I wouldn't have the faintest idea what to do with one that wasn't already skinned and gutted.
Second question, what about the word "bunny"? Doesn't that mean a young rabbit? Or is more of popular word versus technically accurate one?

Hello Elise - rabbit is available here, but it is not particularly common or popular. Australia has a hate-hate relationship with it because it has caused monumental environmental havoc (rabbits were imported from England in the early days of settlement), and I think this has spilled over to mean lack of enthusiasm for it as a culinary item. Hare - Hmm. Come to think of it I dont remember ever seeing it on a menu here. I will find out the hare situation and let you know! (See - there's no such thing as a stupid question!). I think the times I have eaten it have been in Europe. The word "bunny" is a childish word, the sort you would use for a fluffy toy, or the "Easter Bunny", not when you wanted to order rabbit from the butcher.
There are some great-sounding recipes for hare in old cookbooks.