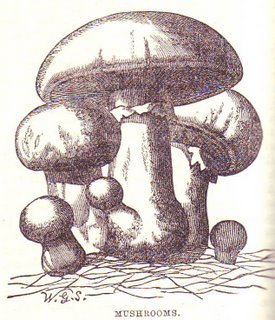 The widowed gentlewoman Elizabeth Purefoy lived with her son, Henry in Shalstone Manor in Buckinghamshire, England in the mid-eighteenth century. Country estates in those days were essentially self-sufficient, but the well-to-do of every era have always had little wants that have to be sourced elsewhere. On this day in 1751, Henry wanted mushrooms, and sent to Oxfordshire for them:

“I understand from the People of Astrop that you sell pickled mushrooms, so desire a line or two from you to let me know the price you sell’em at, & whether by the Quart bottle or in a Pan & when you will have any ready for sale”.

It is a little strange, that request, given that wild mushrooms must have been plentiful in Buckinghamshire, and every cook’s repertoire would have included several ways of preserving them. Perhaps there was some nervousness about sourcing wild mushrooms in view of their occasional serious toxicity, in which case there must have been an assumption that the dealer (or his supplier) would not make any identification errors.

A century later, ‘Cassell’s Dictionary of Cookery’ refers to ‘Esculent Funguses of England’ by Dr Badham, and goes on to say:

“According to Dr Badham, the majority of fungus are harmless, but his account of the poisonous effects of the minority, and the post-mortem appearance of the organs of those who have died through partaking of them, are enough to alarm the most stout-hearted.”

The Dictionary then advises that “All the edible species should be thoroughly masticated before being taken into the stomach, as this greatly lessens the effect of poisons … It is however, the safest way not to eat any of the good but less common kinds until they have been soaked in vinegar…” [but if they are edible varieties …?]

One of the thirty-plus headings on the topic of mushrooms is “Mushrooms, Edible and Poisonous, To Distinguish”. Seemingly this descriptive advice was considered sufficient for the “stout-hearted” English, whereas “On the Continent, persons are specially appointed to examine all fungi sent to market, so that only those which are safe to eat are allowed to be sold.”

Had Henry, or the Shalstone Manor cooks been confident of their mushroom-choosing ability, they might have followed a recipe such as the following one, from Elizabeth Raffald’s "The Experienced English Housekeeper … " (1769). Times do change however, scientific knowledge and the burden of ‘duty of care’ increase apace, and today we would not at all be confident about the safety of the recipe itself!

To keep Mushrooms to eat like fresh ones.
[WARNING: this method would not be considered safe today.]
Wash large buttons as you would for stewing, lay them on sieves with the stalk upwards; throw over them some salt to fetch out the water. When they are drained, put them in a pot and set them in a cool oven for an hour, then take them carefully out and lay them to cool and drain. Boil the liquor that comes out of them with a blade or two of mace, and boil it half away. Put your mushrooms into a clean jar well dried, and when the liquor is cold, cover your mushrooms in the jar with it, and pour over it rendered suet. Tie a bladder over it, set them in a dry closet, and they will keep well most of the winter.
When you use them take them out of the liquor, pour over them boiling milk, and let them stand an hour. Then stew them in the milk a quarter of an hour, thicken them with flour and a large quantity of butter, and be careful you don’t oil it. Then beat the yolks of two eggs with a little cream and put it in, but don’t let it boil after the eggs are in. Lay untoasted sippets round the inside of the dish and serve them up. They will eat near as good as fresh gathered mushrooms. If they don’t taste strong enough, put in a little of the liquor. This is a valuable liquor and it will give all made dishes a flavour like fresh mushrooms.

Plenty of eggs and sugar.

I confess, that nothing frightens me more than the appearance of mushrooms on the table, especially in a small provincial town. Alexandre Dumas.
Posted by The Old Foodie at 5:49 AM

I tasted pickled mushrooms just the other day. How interesting this post is. Thank you.

Hello Lucy. Thanks for finding me - and now I have visited your blog - I love it and will visit regularly.
Janet