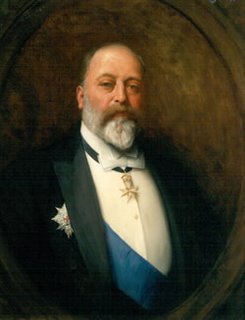 King Edward VII was known to be a man of prodigious appetite, fastidious dress sense, and occasional violent temper. These came together in spectacular fashion (if an oft-repeated story of him is true) during one particular society dinner. According to the story a tiny speck of spinach fell upon the pristine white royal shirt-front, at which the King well and truly lost his regal cool, plunged his hands into the spinach bowl and proceeded to right royally besmear the rest of his bosom. In his defence, it must be said that he may have suffered from the royal “madness” of the inherited disease Porphyria. If not, he was a spoiled brat and ought to have been made to clean up his mess, but somehow I doubt that that happened.

The date of the Spinach-Incident is not recorded, but it could perhaps have been on this day in 1904, when spinach was on the menu at an official reception.

The National Training School for Cookery in the late Victorian era was situated in Buckingham Palace Road, and it is not too far-fetched to think that graduates might have found employment at that royal home just down the road. The Lady Superintendent, Mrs. Charles Clarke, published a book called ‘High Class Cookery Recipes’, and it contains this recipe for spinach which has some definite bosom-smattering potential.

On spinach: "I dislike it, and am happy to dislike it because if I liked it I would eat it, and I cannot stand it." Le Prudhomme; Flaubert's Dictionnaire des idées reçues.

timely [and interesting as usual] article with the big e-coli scare with spinach now going on in the united states and canada.

did incidents such as these occur "back then", i wonder?

I'm sure those things have always happened - we now have better science to identify the problem and a huge media machine to disseminate the story.

oops, forgot to add ... reported incidents of numbers people being "mysteriously" poisoned after consuming a leafy vegetable such as spinach. (e-coli, and other bacteria not being new things modern things). but yes, we know now much we did not previously.

interesting that the more our society becomes "anti-bacterial" everything, the more i seem to see and hear about these reported poisonings. perhaps it is just a matter of our world having better and immediate access to these reported incidents.