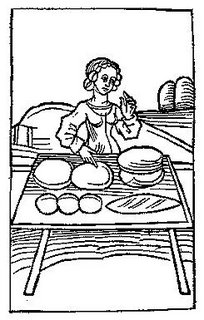 A food article in the New York Times fifty years ago today very conveniently gives us our topic for the day. The article was inspired by the acquisition of some antique cookie (biscuit) moulds by Bloomingdales’ ‘Au Gourmet’ shop, and which, it said, would be of interest to the “antique huntress”, and rather more easily explainable (justifiable?) to her husband than her usual purchases. In particular the article mentioned a twelve-inch tall gingerbread man mould all the way from London, for a mere $25. The article then went on to give instructions for Spice Cookies which did not contain ginger, and were to be cut into shapes, not pressed into moulds - which would seem a poor choice of recipe were it not for the long and complicated history of the thing we call gingerbread.

Gingerbread today is not bread, it is more usually in the form of cake, but over time the word has meant many other things. Originally “gingerbread” simply meant preserved ginger, the English word being related to the Old French gingebras – the last syllable of which became corrupted to become “bread”. Hundreds of incarnations of “gingerbread” have developed over hundreds of years, and at different times and in different places it might have referred to a fudge-like confection made with a base of bread-crumbs or almonds and pressed into moulds, or a sweet pastry-like dough cut and baked in “what shape you please”. The sweetener might have been sugar or honey or molasses or treacle. It may have been “white”, or coloured red with sandalwood, or gilded with real gold, or decorated with lurid icing. Sometimes, as in The New York Times recipe for the day, the spice mix did not even contain ginger.

As for gingerbread men, the myth that will not go away will have to suffice until a better one appears. According to this story, gingerbread men were invented by Queen Elizabeth I who had them made in the image of her courtiers, as small gifts.

There are only two questions to ask about food. Is it good? And is it authentic? We are open [to] new ideas, but not if it means destroying our history. And food is history. Giuliano Bugialli.

You know, I've often wondered why it's called ginger"bread". This recipe actually is similar to my gingerbread man recipe - just add the ginger! I wonder if our friend Mr. Pastry might use gingerbread as an upcoming topic, hmmmm? Good post Janet!

I have a cookbook devoted entirely to gingerbread, called, I believe, "The Gingerbread Book", with quotes from such people as Ben Johnson and Abraham Lincoln. It has a fine recipe for honey gingerbread. Some people who claim not to like gingerbread like it, as it is really the molasses they object to. It has a strong ginger flavor.