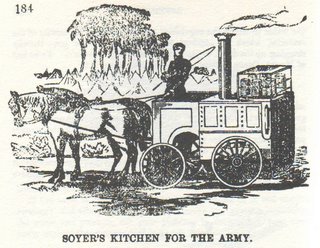 The Crimean War had been underway for nearly 12 months when the French-born, English resident chef Alexis Soyer volunteered to travel to the front lines at his own expense, to assist with feeding the British military. Soyer was an enormously resourceful man – a flamboyant, perfectionist, obsessional workaholic - not just an inspired cook, but a cookbook author and prolific inventor of kitchen equipment.

He need never have stepped out of his highly esteemed position in the well-appointed kitchens of wealthy English aristocrats, but for his highly developed social conscience. When he heard of the suffering in Ireland during the potato famine, he travelled there and set up soup kitchens – developing his “famine soup” recipe and portable cooking equipment to do the job. Later, his correspondence with Florence Nightingale made him realise that his skill in feeding large numbers of people with not much in the way of supplies would be of value in the Crimea, where conditions were unspeakably awful, and getting worse.

When he arrived in Scutari in March 1855, the English troops were a malnourished, ill-clad, verminous lot, suffering from scurvy and cholera. The soldiers daily ration at the time – in theory - was 1 lb army biscuit, 1 lb meat, and a few sundry other items. In practice there were supply problems, no efficient catering system (each soldier fending for himself) and no fuel to cook with (and it was wet and cold).

Soyer’s efforts changed British Army catering for ever. He immediately organised kitchens, arranged supplies of dried vegetables, and developed recipes using Army rations which he then printed and sent out into the field. His biggest contribution however was the mobile field oven, which was formally launched on this day in 1855.

The basic design was still in use by the British Army almost a century later during the Gulf War – an amazing legacy of which Soyer would have been proud. Sadly, he died a few years later in 1858, at the age of 48 – his health apparently damaged by his voluntary war service.

Soyer kept up a correspondence with the Times newspaper while he was at Scutari, and his letters included examples of the recipes he developed: here is a sample:

(Receipt No. 1)
STEWED SALT BEEF AND PORK A LA OMAR PASHA
Put into a canteen saucepan about 2lb of well soaked beef, cut in eight pieces; ½lb of salt pork, divided in two, and also soaked; ½lb of rice, or six tablespoonsful; ½lb of onions, or four middle-sized ones, peeled and sliced; 2oz of brown sugar, or one large tablespoonful; ¼oz of pepper, and five pints of water; simmer gently for three hours, remove the fat from the top and serve. The first time I made the above was in Sir John Campbell’s soup kitchen, situated on the top of his rocky cavern, facing Sebastopol, near Cathcart’s-hill, and among the distinguished pupils I had upon the occasion were Colonel Wyndham, Sir John Campbell, and Dr Hall, Inspector-General of the Army in the Crimea, and other officers. This dish was much approved at dinner, and is enough for six people, and if the receipt be closely followed you cannot fail to have an excellent food. The London salt meat will only require a four hours soaking, having been only lightly pickled.

(Receipt No. 7)
COSSACKS’ PLUM PUDDING
Put into a basin 1lb of flour, ¾lb of raisins (stoned, if time be allowed), ¾lb of the fat of salt pork (well washed, cut into small dies, or chopped), two tablespoonsful of sugar or treacle; add a half pint of water; mix all together; put into a cloth tied tightly; boil for four hours, and serve. If time will not admit, boil only two hours, though four are preferable. How to spoil the above:- Add anything to it.

The same intelligence is required to marshal an army in battle and to order a good dinner. The first must be as formidable as possible, the second as pleasant as possible, to the participants. Plutarch (c. 46- 127)

What an amazing story of an ingenius chef. Very inspiring that he pursued his social conscience so devotedly. Also a good example of how social conditions influence food and eating.

I've only just started reading your blog regularly but I absolutely love it. Very original, and always interesting and beautifully written.

Thankyou for stopping by VF, and for enjoying my little stories. I hope you find some interesting old veggie friendly recipes in the recipe archive!