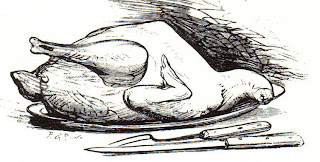 The American writer Henry Miller died on this day in 1980. He once had a conversation by correspondence with his British writer friend Lawrence Durrell on the subject of the food in Hell.

Miller wrote: “Hell is probably quite similar to most bistros ... a bit overheated, somewhat too crowded, and a little too noisy for my tastes. The waiters will surely treat you rudely and the cashiers will always add a few extra francs to your bill but ... and this is the important part ... the food will be marvellous”.

Some time later, Miller and Durrell spent some time on the , which – being part of the – is of volcanic origin and sometimes smells of the sulphur. Durrell apparently asked his friend how he would feel about his “bistro” smelling sulphurous (as Hell is said to do).

Miller replied: “With a good bouillabaise, a young chicken cooked in tarragon and a good wine from not even the smells of hell will bother me”

Presumably, in Hell’s Kitchen, the Devil is Cook. Which made me think of the hot dishes called ‘devils’ that were so beloved of the Victorian Englishman. The eccentric English cookbook writer William Kitchener eloquently described their delights (and dangers) in his book The Cook’s Oracle, and they can be read on the Companion site HERE. We have also previously had recipes for Devilled Chestnuts and Devilled Eggs, so we should perhaps find another focus for today.

This story started with Henry Miller, whose idea of heavenly food in Hell included the French bistro version of chicken cooked in tarragon, so here is a recipe from the eccentric French cookbook writer, the Baron Brisse (1868).

Chicken with Tarragon.
Boil some finely chopped tarragon-leaves and take a third of them to mix with a stuffing made of minced liver of chicken, scraped lean bacon, salt and pepper. Stuff the fowl with it, truss and cover with slices of bacon, wrap up in a sheet of buttered paper and roast. Melt some fresh butter, stir in a little flour, and add the remainder of the tarragon leaves, a little gravy, a few drops of vinegar, salt and pepper. When the fowl is two-thirds cooked, take it off the spit and simmer in a stew-pan with the sauce until quite done. Thicken the sauce with two or three yolks of eggs before serving.

The disappearance of hot hors-d'oeuvre was the result of the excessive development of women's skirts. Baron Leon Brisse (1813-1876)

Based on that description, I think I know where I'm destined to go.

Me too. I think I'll be meeting a few old friends there.

I am reminded of a cartoon from New Yorker cartoonist Jack Ziegler I have in his book called “How’s the Squid?”

A demon stands at the entrance to Hell like a maître d'hôtel (or maître d'hell, as the case may be) with a clipboard. A new arrival to Hell stands before him and the demon says,

“And lastly, for all eternity, French, blue cheese, or ranch?”

My idea of food in Hell would be no variety. The same dish for every meal, every day...for all eternity.

Hello Paul - that would, absolutely, be my idea of Hell too. The same meal twice in a week is bad enough.