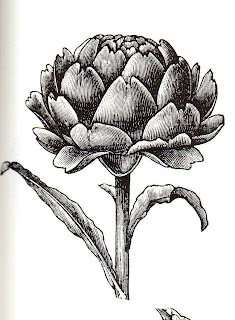 Norma Jeane Mortenson was crowned ‘Artichoke Queen’ in ‘The Artichoke Capital of the World’ on this day in 1947. You probably know her better as Marilyn Monroe, and you will find the town better by looking up . Norma/Marilyn’s career was not to start for a few years, but Castroville had been working for two decades at growing and promoting the “new” vegetable in order to earn its title.

The artichoke is a member of the thistle family and is similar to the cardoon, which is almost as unfamiliar to a lot of us as the artichoke. It probably arose in or and arrived in in the fifteenth century, and in a confused time later.

Like so many other newly introduced plants, the artichoke was first accused (or lauded) as being an aphrodisiac. In the words of one sixteenth century physician "it has the virtue of . . . provoking Venus for both men and women; for women making them more desirable, and helping the men who are in these matters rather tardy." I did ponder – with this mythoid in mind – if this attribute of the artichoke helped Marilyn’s reputation, or vice-versa.

As to the recipe for the day, I thought to provide you with an artichoke recipe from the mid-1900’s, to fit the story for the day. First, I did a quick browse across the centuries and found that in Adam’s Luxury and Eve’s Cookery (1744) there were nine recipes for fresh artichokes; Mrs Beeton (1861) has three; The Lily Wallace New American Cookbook (1946) has two – and the default artichoke is canned. Progress is about improving, adding, learning etc, isn’t it?

It pains me to do it, when a wonderful Fricassy of Artichokes appears in the book of 1744, but somehow I feel I must give you the recipes from the book of Marilyn’s time – we cannot hide from history you know, we must face canned artichokes square-on, with bravery.

These things are just plain annoying. After all the trouble you go to, you get about as much actual "food" out of eating an artichoke as you would from licking 30 or 40 postage stamps. Have the shrimp cocktail instead. Miss Piggy

I hate to admit it, but I love this! Did they specify exactly what brand of mayonnaise? Sounds very 1940s chic!

Believe it or not, recipe 701 is real mayonnaise, home-made from a standard recipe. Then there are 13 variations, including fruit salad mayo, marmalade mayo, marshmallow mayo and banana-nut mayo. I'll send you the lot, if you like. Strange, isnt it - real mayo on canned artichokes?