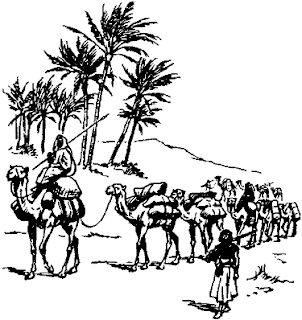 Today is the feast day of Saint Onuphrius, who, like the rest of the Saints I have featured in this blog, is only on my radar on account of a food connection. Saint Onophrius was a hermit, as Saints are wont to be, and lived during the 4th Century in . He lived entirely, it is said, on dates. He could have made a worse choice (athough there may not have been too many choices in 4th C Egypt) – because dates are not only nutritious (high fibre, high carb, almost zero fat, and lots of vitamins and minerals etc etc etc), they are delicious.

The date palm is native to and the , and is one of the oldest food plants cultivated by humans. It appears that we have been growing it for at least 7000 years in one of the world’s most challenging environments – the hot dry desert. The plant must have developed some spectacular survival mechanisms to have been so successful, and in a truly amazing example of time-warp gardening, a botanist in has managed to germinate a 2000 year-old seed from a Judean date tree that was thought to be extinct. Perhaps one day we might be able to eat dates with a direct link to biblical times, which would be an amazing example of time-warp eating!

There is an old saying that there are as many ways of using dates as there are days in the year, and I don’t doubt that is true. They were certainly known and enjoyed by Europeans in the 13th century, no doubt thanks to returning crusaders. They were enjoyed only by the wealthy of course, who must have relished their sweetness in the centuries before sugar became cheap. I have chosen two medieval recipes for you featuring dates, either of which would be perfect for today.

The first is from an Anonymous Andalusian Cookbook of the 13th Century, translated Charles Perry, and is for a sort of date and nut paste or cake that would be excellent on a cheese platter.

A Sweet of Dates and Honey.
Take Shaddâkh dates. Clean them of their pits and pound a ratl of them in a mortar. Then dilute with water in a tinjir on a gentle fire. Add the same amount of skimmed honey. Stir it until it binds together and throw in a good amount of peeled almonds and walnuts. Put in some oil so it doesn't burn and to bind firmly. Pour it over a greased salâya (stone work surface). With it you make qursas (round cakes). Cut it with a knife in big or little pieces.

The second is a Lenten tart from the first English cookbook, the Forme of Cury (about 1390). As a Lenten dish it contains no milk or eggs. The instructions are strange to us today, but it seems that a thick ‘custard’ of almond milk and rice flour is made and allowed to set, then cut into pieces and layered with cut up figs and dates in the pastry ‘coffin’, and finally more almond milk is poured in before it is baked.

For To Make Flownys [flans] In Lente.
Tak god Flowr and mak a Past and tak god mylk of Almandys and flowr of rys other amydoun and boyle hem togeder' that they be wel chariaud wan yt is boylid thykke take yt up and ley yt on a feyr' bord so that yt be cold and wan the Cofyns ben makyd tak a party of and do upon the coffyns and kerf hem in Schiveris and do hem in god mylk of Almandys and Figys and Datys and kerf yt in fowr partyis and do yt to bake and serve yt forth.

The first of all considerations is that our meals shall be fun as well as fuel. Andre Simon.