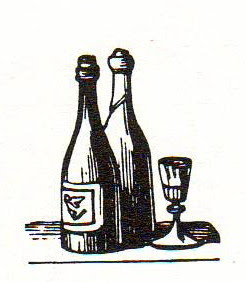 Once upon a time, Harrods of London ran a series of newspaper advertisements in which they gave suggested menus for the day. Naturally, the ingredients could all be sourced at Harrods. I give you the menu for this day in 1914. Check out those prices, and weep. Don’t weep too hard over the canned peaches. Weep very hard over the champagne.

The ingredients will cost you more today, but here are a couple of recipes to fit this menu, from Soyer's Standard Cookery, 1912.

Anchovy Butter.
Take the bones from six anchovies, wash the fillets and dry them upon a cloth, pound them well in a mortar; add six ounces of fresh butter, mix well together, and proceed as in the last.

White Mock-Turtle Soup.
Procure half a calf's head, (scalded, not skinned), bone it, then cut up a knuckle of veal, which put into a stewpan, well buttered at the bottom, with half a pound of lean ham, an ounce of salt, a carrot, a turnip, three onions, a head of celery, a leek, a bunch of parsley and a bay-leaf, add half a pint of water; set it upon the fire, moving it round occasionally, until the bottom of the stewpan is covered with a white glaze; then add six quarts of water, and put in the half head, let simmer gently for two hours and a half, or until the head is tender, then take it out, and press it between two dishes, and pass the stock through a hair sieve into a bowl; then in another stew-pan have a quarter of a pound of butter, with a sprig of thyme, basil, marjoram and bay-leaf, let the butter get quite hot, then add six ounces of flour to form a roux, stir over a sharp fire a few minutes, keeping it quite white; stand it off the fire to cool, then add the stock, stir over the fire until boiling, then stand it at the corner, skim off all the fat, and pass it through a hair sieve into another stewpan; cut the head into pieces an inch square, but not too thick, and put them into the soup, which season with a little cayenne pepper; when the pieces are hot, add a gill of cream and pour it into your tureen.
The above quantity would make two tureens of soup, and will keep good several days, but of course half the quantity could be made.

A recipe for Mock Mock Turtle Soup (the name is not a typo!) is HERE.

If the soup had been as warm as the wine, if the wine had been as old as the turkey, if the had had a breast like the maid, it would have been a swell dinner. Duncan Hines.

After reading Dr. K's recipe for "mock mock", which reads like an hour or three's hard labour, I checked the online "Cook's Oracle" for his "mock turtle", for purposes of comparison, thinking that it could hardly be more complicated. How wrong could I be? Four pages of instructions! The only simple thing about it is the final instruction that "cucumber in a side-plate is a laudable vegetable accompaniment".

My favourite Kitchiner-ism is the recipe for bubble and squeak, which you quoted quite recently, which is accompanied by a crazy, four-voice round on the words "beef" and "cabbage". It's even crazier than I remembered, because I just for the first time noticed that each of the four voices is in a different key!


This text is a link to a page on the World Wide Web.

I once owned an 1830 Philadelphia edition of the "Oracle", which I sent to my mother in England and forgot to ask for when her estate was settled. But the online scan is handy. Roger

Hello Roger - I love Dr K, he is great fun. Editions of his Oracle are also available bia Google Books and the Internet Archive. I am addicted to both those sites.
Pity about your own book. I have a very tatty 1845 edition. Online searchable texts are easier though!

OT-I'm a little confused by what you mean by 'permission required' to copy material from your site. I'm assuming I can offer a short excerpt and a link on my own blog without requesting permission. If not, please let me know and I'll take it down. On principle I refuse to ask permission for what surely falls under 'fair use'.

I publish my fiction online under a CC licence and am more than happy for others to spread the word, with proper attribution and no commercial exploitation, of course. Why else would I make it public in this manner?

Hello Lee - you are welcome to use material from my site, with attribution (link) - I think most of us (I am sure you would include yourself) just dont want wholesale unattributed theft of our work.
I am pleased (and honoured) that my post was useful to you.
I'll see what I can find for you on redcurrants!
Kind regards
Janet