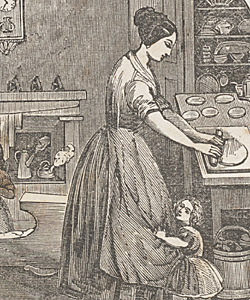 A young soldier stationed in called Frederick Osborne wrote home to his family in on this day in 1862. He made mention of a local specialty:

“Aunt e has been making 'lection cake I suppose, or is the time for it past?”

Young Fred was referring to Election Cake, a cake associated with – as its name suggests – local elections. It is a specialty, and came to be particularly associated with .

The history of Election Cake goes back to colonial times, to the days when the British summoned eligible men from far and wide to the nearest town for military practice, and the whole town prepared for the onslaught of hungry soldier-farmers. In other words, the town’s housewives did a lot of baking of very large cakes which at that time were known as Training Cakes or Muster Cakes.

Even before the Revolution the same cakes served well for elections, when party representatives descended on the same towns for the vote-counting. The military association did not go away completely however. A New York Times article in June 1871 described the recent Artillery Election Day in when officers were elected and commissioned in a ceremony that was a “relic of colonial days”. The newspaper bemoaned the loss of glory of this once great holiday when parades were held, and election cake and luscious ginger-beer could be purchased from stalls set up on the Common.

Election cake was a fruited yeast bread (leavening agents such as baking powder were not developed until the mid-nineteenth century). The first American cookbook, by Amelia Simmons, contained this recipe which you will find most useful if a few score out-of-town visitors descend on you.

Election Cake
Thirty quarts flour, 10 pound butter, 14 pound sugar, 12 pound raisins, 3 doz eggs, one pint wine, one quart brandy, 4 ournces cinnamon, 4 ounces fine colander seed, 3 ounces ground alspice; wet the flour with milk to the consistence of bread oover night, adding one quart yeast; the next morning work the butter and sugar together for half an hour, which will rended the cake much lighter and whiter; when it has rise light work in every other ingredient except the plumbs, which work in when going into the oven.
[American Cookery; Amelia Simmons 1796.]

The Breakfast of Travellers.

I won't eat anything that has intelligent life, but I'd gladly eat a network executive or a politician. Marty Feldman.

I was familiar with the Hartford CT connection, but did not realize that the tradition actually goes back to colonial military drills. Quite fascinating! Have you come across anything about "Independence Cake?" It's in a later edition of Simmons.

Is colander seed coriander? OED does not help with this one, beyond the medieval Latin word "coliandrum" in the earliest, mid-13th c. citation.

Hi T.W. I dont know much about Independence Cake - apart from the recipe you mention from Simmons, and in a few other books. Another project!

Roger - I assume it is coriander seed as it appears in other recipes for similar cakes in the book. A typo I suspect

Note to the Old Foodie: How do you keep doing it each and every day? Always something new and interesting - I could only wish to have this knowledge and dedication - well done!

Hello Scott - I think it is more that I have collected a lot of information (otherwise known as "stuff") and I seem to have a knack of being able to find what I want fairly quickly. I dont know about the dedication bit - it is more escapism I think!