A Recipe for Mum. 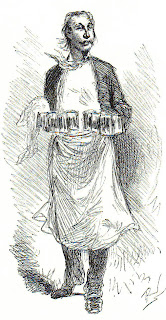 Samuel Pepys enjoyed a trendy seventeenth century drink on this day in 1664:

“…thence with my uncle Wight to the Mum house; and there drinking, he doth complain of his wife most cruelly, as the most troublesome woman in the world…”

The specialty at the Mum house was – Mum. Mum was a type of beer originally made in Braunschweig () in . At first it was made entirely from wheat malt, although at later times barley malt was also used. It was strong, flavoured with hops and various herbs, and aged for a couple of years before being unleashed on the public. Mum was popular in Pepys’ time, partly on account of its supposed medicinal benefits (an old beer-drinkers excuse). It was supposedly “wholsom for Melancholy Flegmatic People, and for those whose Food is coarse Bread and Cheese, Flower'd [i.e floured] Milk, Herbs and lean Potages, …” as well as being “very great in the Gravel, and against inward Bruises”.

Naturally, whatever the Germans could do, the English tried to do better, and recipes for Mum soon started appearing in English cookbooks. There were often comments about its not particularly pleasant flavour (probably necessary in order to claim medicinal benefit?) – perhaps on account of the birch and fir tops. Maybe that is why old cookbooks also had recipes for bottled sauces using old Mum as an ingredient?

To make Mum.
Take thirty-two gallons of Water, boil it till a third part is waster, brew it according to Art, with three Bushels and a half of Malt, half a Bushel of ground Beans, and half a Bushel of Oat-meal; when you put it into your Cask, do not fill it too full, and when it begins to work, put in a Pound and a half of the inner Rind of Fir, half a Pound of the tops of Fir and Birch, (instead of the inward Rind and tops of Fir, our English Mum-makers use Cardamums, Sassafras and Ginger, the Rind of Walnut-tree, Elecampane-root, and red Sanders; others add Alexander Water-cresses, Brook-lime, and Horse-radish Root rasp’d) Avens, Beton, Burnet, Marjoram, Mother of Thyme, Penny-royal, of each a small Handful, Elder-flowers a Handful, of Rosa Solis a handful, of Carduus Benedictus a handful and a half, of Barberries bruis’d half an Ounce, of Cardamums bruis’d an Ounce and a half; these Ingredients are to be put in when the Liquor has wrought a while, and after they are let it, let it work over the Vessel as little as may be; when it has done working, fill up the Cask, and put into it five new laid Eggs, not broken nor crack’d, stop it close, and it will be fit to drink in two Years.
[Cook and Confectioners Dictionary; hn Nott 1724]

To make Mum Catchup.
To a quart of old mum put four ounces of anchovies, of mace and nutmegs sliced one ounce, of cloves and black pepper half an ounce. Boil it till it is reduced one third. When cold, bottle for use.
[The Experienced English Housekeeper; Elizabeth Raffald, 1769]

Not all chemicals are bad. Without chemicals such as hydrogen and oxygen, for example, there would be no way to make water, a vital ingredient in beer. Dave Barry.