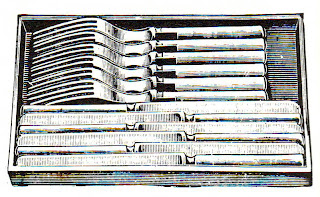 It is said that the first fork to arrive in made its entry on this day, as part of the goods carried by Gov. hn Winthrop to the Massachusetts Bay Colony. It was a single fork, not a set, and was carefully carried in its own leather case. A mini-timeline is in order to put this event into perspective.

11th century: It appears that the Greeks may in fact have been the first to use forks, if the story of the bride of Domenico Selvo, Doge of Venice, is true. The Greek princess was so refined she had a eunuch to cut her food into small pieces which she then proceeded to eat with a golden fork. This was considered to be so decadent and delicate that her death a short while later was seen as evidence of Divine Retribution.

1364 - 80: Charles V of had several forks amongst his household treasures – but they were only to be used for foods which would otherwise stain the hands . It is not noted whether or not this was considered decadent.

1533: Oft-repeated history says that Catherine de Médici of took forks to when she married Henry II of (but if we are certain that Charles V already had them nearly a century before, then they must already have been in ?) It does seem that it was the Italians who first used the fork regularly and popularised its use throughout .

1611: An English traveller, Thomas Coryat, observed the use of forks in , and thought the idea so good he took up their use on his return, for which he was soundly ridiculed.

It was not until well into the eighteenth century that forks became common-place, but a slow start was compensated for by the Victorians in the nineteenth century. Their love of dining table knick-knackery meant that special forks (and other utensils) were designed for specific foods: bacon forks, lettuce forks, asparagus forks, strawberry forks, sardine forks, oyster forks …. You get the idea.

Until there were forks, there were no fork luncheons of course, so may of the little recipes in For Luncheon and Supper Guests by Alice Bradley (1912) would have had to have been eaten very inelegantly with spoons or fingers. ’s book says that they are “Suitable For Company Luncheons Sunday Night Suppers, Afternoon Parties Automobile Picnics, Evening Spreads And For Tea Rooms, Lunch Rooms Coffee Shops, And Motor Inns.” I just worry that she didn’t specify which fork to use for which dish. I don’t think there was an egg fork (please correct me if I am wrong), so perhaps the bacon fork would do for this one.

Creamed Eggs And Mushrooms With Bacon Curls.
Put 6 eggs in top of double boiler. Cover with hot water, bring to boiling point, place over boiling water or on back of range and let stand 60 minutes. Remove shells and cut eggs in eighths lengthwise.
Remove skins and stems from ½ pound mushroom caps and cut in slices lengthwise.
Cover stems and skins with 1 ½ cups cold water, heat slowly to boiling point, simmer gently 20 minutes and strain.
Melt ⅓ cup butter, add ⅓ cup flour mixed with ¾ teaspoon salt and ⅛ teaspoon pepper. When smooth add stock strained from mushroom skins, with enough top milk or thin cream to make 3 cups. Stir until sauce boils.
Sauté mushroom caps in 1 tablespoon butter for 3 minutes. Add to sauce with the hard cooked eggs. When thoroughly heated turn out on a platter and arrange bacon curls over the top.
4 small cooked potatoes cut in pieces or 1 cup cooked macaroni or 1 small can asparagus cut in pieces may be used instead of mushrooms.

Bacon Curls.
Place thin strips of bacon on a board and with a broad-bladed knife press strips out as thin as possible. Roll each slice into a curl and fasten with a wooden toothpick. Cook until crisp and delicately brown in hot bacon fat deep enough to cover the curls of bacon. Drain on brown paper and remove toothpicks.

The Italian and also most strangers that are commorant in Italy, do alwayes at their meales use forke when they cut their meat for while with their knife which they hold in one hand they cut the meate out of the dish, they fasten their forke, which they hold in their other hand, upon the same dish; so that whosoever he be that sitting in the company of any others at meale, should unadvisedly touch the dish of meate with his fingers which all at the table doe cut, he will give occasion of offence unto his company, as having transgressed the lawes of good manners, insomuch that for his error he shall least be brow beaten if not reprehended in wordes. This form of feeding I understand is generally used in all places of ; their forkes being for the most part of yron or steele, and some of silver, but those are used only by gentlemen. The reason of this their curiousity is, because the Italian cannot by any means indure to have his dish touched with fingers, seeing all men's fingers are not alike cleane. Thomas Coryat, 1611.

In chapter 10 of "American Notes" (1842), Dickens describes life on a river boat, traveling South from Pittsburgh to Cincinnati: "There is no doubt that the meal .... was disposed of somewhat ravenously; and that the gentlemen thrust the broad-bladed knives and the two-pronged forks further down their throats than I ever saw the same weapons go before, except in the hands of a skilful juggler."

Of interest here is the conservative design of American flatware at this date - 1842 is late for the two-pronged fork and the broad blade - and the apparent fact that the broad, curved? knife blade was still used in 18th c, fashion, to convey food to the mouth.

In the next chapter, Dickens refers to fellow passengers who "usually suck their knives and forks meditatively, until they have decided what to take next."

The raspberry vinegar is so-so. Fresh US raspberries are picked under-ripe (with good reason), so the Cassells recipe will call for extra sugar (not yet added). Frozen berries are riper, tho' for some reason far tarter in this country. Either way,more sugar. Both Mrs Beeton & Dr. Kitchiner add a brandy. I shall be following their example. Roger

ps Do you know of an on-line text of Miss Acton?

Hello Roger - I have not yet found Acton's Modern Cookery online. I have a facsimile copy from Southover Press. Her bread book is available at Google books. Have you seen the list of online historic cookbooks (over 500 of them)? - I have made up a pdf and it is available for download - just go to the link in the sidebar and click and it is yours. If you would like the Excel spreadsheet from which it is derived (and to which I have added a few more) I will happily send. I have a "master list" of all my resources - online, on computer, text etc so that I can see at a glance what resources I have for a particular era. If I send you the spreadsheet of online resources you can personalise it with your own stuff. Email me if you want it. (and I will happily send to anyone else out there who is reading this)
keep us up to date with the raspberry vinegar.
Janet

If you haven't read it, The Rituals of Dinner by Margret Visser contains a couple of chapters on the history modern cutlery.

Hello Kevin - I read it a long time ago, and had completely forgotten that it had someting on cutlery in it. It is definitely worth re-reading. Thanks for reminding me!