A pot of the best tea. 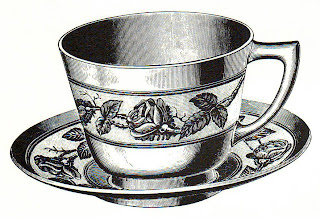 The first known reference to tea by an Englishman appeared in a letter dated this day in 1615. An agent, R.L. Wickham in wrote to his colleague Mr Eaton in requesting “I pray you to buy for me a pot of the best chaw.” His “chaw” was an attempt at the Chinese ch’a - which persists in the very English reference to a cup of tea as a ‘cuppa char’, and in the currently-fashionable-again spiced‘chai’.

The Chinese had been drinking tea for many hundreds of years by then of course. The idea filtered into in the early ninth century, but it remained a Far Eastern secret until the mid-sixteenth century. The first European to taste tea and write about it was a Portuguese Jesuit missionary, Father Jasper de Cruz in 1560. The exotic medicinal drink took another hundred years before – in today’s parlance – it began to achieve significant market penetration. It was not offered for sale to the public in England until 1657, when it was advertised as being “wholesome, preserving perfect health until extreme old age, good for clearing the sight,” and able to cure "gripping of the guts, cold, dropsies, scurveys" as well as making the body “active and lusty.” Samuel Pepys had his first taste of the “ drink” in 1660, but by 1667 he was able to write of his wife making it at home – again, for medicinal reasons, her apothecary advising her it was good for her “cold and defluxions.”

Tea is, in my humble opinion, still wonderfully therapeutic on its own, but sometimes it is necessary to take a little sugar to make the medicine go down. This is, I am confident, the reason why so many Tea Cake recipes were invented – this seems to have happened somewhere in the first half of the nineteenth century. The phrase covers a wide variety of treats today, but originally a tea-cake was “a light kind of flat cake to be eaten at tea”. Sometimes these were in the nature of a sweet yeast bun, sometimes more like a scone or a small cake, using baking powder as leavening agent. I give you one of each type, from the Cookery Book of Lady Clark of Tillipronie (1909).

Sultana Tea-cakes (Mrs Emslie, 1897)
Baked in ribbed quenelle moulds.
¼ lb. butter, ¼ lb. sugar ¼ lb. flour, 2 oz sultanas, 2 eggs, a little candied peel, and baking powder [she does not specify the amount].
Mix the same as for a cake; bake in small ribbed quenelle moulds. When they are done, cover them with icing of sugar and water, and put them on a wire sieve to dry.

A Recipe for Mum.

The British have an umbilical cord which has never been cut and through which tea flows constantly. It is curious to watch them in times of sudden horror, tragedy or disaster. The pulse stops apparently, and nothing can be done, and no move made, until "a nice cup of tea" is quickly made. There is no question that it brings solace and does steady the mind. What a pity all countries are not so tea-conscious. World-peace conferences would run more smoothly if "a nice cup of tea", or indeed, a samovar were available at the proper time. Marlene Dietrich

I am a great fan of tea cakes, and afternoon tea. How interesting to read this history!

You cant fool me, t.w. It is the cakes you are interested in, not the tea! When is the next Retro Cake challenge?

Thanks for the education. We are always wanting to read about the history of
tea so we can pass on the knowledge to our wonderful loose tea customers.
www.tealaden.com
1-877-TEA-DROP

as i m sipping my teacuppa.com keemun black tea i am missing a piece a cake!!!!! i love buttered tea caked

Have I told you the tale of my buying Earl Grey tea in my student days and the reaction of the college chum whose family had been in the tea trade before WWII? I believe I've recounted it somewhere quite recently and I'd hate to double dip.

The odd thing about accounts of people sticking early iron/steel knives & forks into their mouths (see a post or two lower) is that the soft, high-carbon metal from which some 18th & early 19th century flatware is made, leaves a very strong, very unpleasant taste in the mouth, particularly when it has started to react with the food with which it has come into contact. Supposedly this is the principal reason why silver or silver-plated knives were introduced for fish (earlier practice, as I recall, used two silver forks, one in each hand, to eat fish - I have also seen it stated that this method of eating fish is still used by the Royal Family).