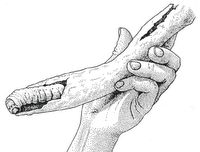 In 1840-1 Edward John Eyre lead an expedition across 1200 miles of some of Australia’s most unforgiving country, to open up the route between Adelaide and West Australia.

By this date, the party was reduced to Eyre and Wylie (his young aboriginal assistant and guide) and their situation was perilous. Eyre wrote:

… I halted for the night, to rest myself and give Wylie an opportunity of looking for food. … There were many grass-trees in the vicinity, and as several of these had been broken down and were dead they were full of the white grubs of which the natives are so fond. From these Wylie enjoyed a plentiful, and to him, luxurious supper. I could not bring myself to try them, preferring the root of the broad flag-reed, which, for the first time, we met with at this stream, and which is an excellent and nutritious article of food. This root being dug up, and roasted in hot ashes, yields a great quantity of a mealy farinaceous powder interspersed among the fibres; it is of an agreeable flavour, wholesome, and satisfying to the appetite. In all parts of Australia, even where other food abounds, the root of this reed is a favourite and staple article of diet among the aborigines.

The white grub so relished by Wylie was, of course, the witchetty or witjuti grub, the larva of a moth found in the roots of some species of wattle known to Central Australian aboriginals as the witjuti bush, or “food tree”. They are usually eaten raw and alive, straight from the wood - although for faint-hearted tourists they are usually cooked. Their flavour is something like chickeny scrambled eggs, and they are highly nutritious - ten large ones will provide sufficient daily protein for one adult.

No recipe is needed then, for the grubs, and Eyre has given us instructions for preparing the reed, so lets jump to a much later period in the settlement, and try another delicacy.

Mrs Rawson’s Roast Bandicoot.
A bandicoot is a very disagreeable animal to clean, therefore it should be done as soon after killing as possible, and then the flesh can be left in strong vinegar and water for a few hours before dressing. Sweet potatoes and onions make a good stuffing for bandicoot, which is good either boiled or baked.

Tomorrow: Day One at the Ritz.

Why is not a rat as good as a rabbit? Why should men eat shrimps and neglect cockroaches?. Henry Ward Beecher.
Posted by The Old Foodie at 6:48 AM

"Grass trees"? Is that something uniquely Australian?

"Grass trees" are definitely Australian - they are sometimes called "Black Boys" (although this is not politically correct now)- they are very thick barrel like trunks with tufts of grass-like leaves sprouting out the top. There is some info about them at
http://farrer.csu.edu.au/ASGAP/APOL33/mar04-5.html

Thank you, O.F.! I've been exploring the world of grass trees for the last half hour - what an unusual and beautiful plant. And so useful! Thanks for the mini-tour of Australia.

Thanks Ed - your early encouragement had a lot to do with me getting blogging.
I'm looking forward to your Aussie food bloggers guide too.