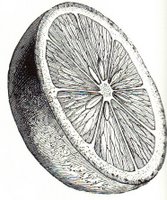 Elizabeth Purefoy was an English gentlewoman living on the family estate in Buckinghamshire in the mid-nineteenth century. The landed gentry were easily self-sufficient, but it behoved their station to obtain delicacies from London to augment their own produce. One of Elizabeths former servants had married and moved to London with her husband, who ran an inn in Islington, and he acted as her agent in the city. She sent him requests, he did his best to fill them, and she let kept him informed as to the condition of the foodstuff when she received it. The fish she loved was often disappointing and “stinking” before it reached her, and sometimes containers leaked or broke. On this day in 1747 she wrote to him:

I received your pickled salmon, and the pot of anchovies, & six Sevill oranges which were all very good & wee return your thanks for them. The salmon was very good but jumbled into pieces & the liqor all run out…I have sent you with your butter a stone Bottle which I desire you to get filled with thevery best sallet oyll & sent as soon as may be.

I wonder what she intended for the oranges? Seville oranges are practically only used in marmalade nowadays, but in the mid-eighteenth century cooks used them far more frequently and in ways we would now consider quite adventurous.

Hannah Glasse’s famous cookbook “The Art of Cookery Made Plain and Easy” was published in the same year that Elizabeth wrote her letter. She used Seville oranges in marmalade of course, and many other sweet dishes such as syllabub, bread pudding, and apple “tort” and “florendine”, but she also used them in “spinage pudding”, “potatoe pye” and this interesting dish of eggs.

To broil Eggs.
Cut a Toast round a Quartern Loaf, toast it brown, lay it on your Dish, butter it, and very carefully break six or eight Eggs on the Toast, and take a red-hot Shovel and hold over them. When they are done, squeeze a Seville Orange over them, grate a little Nutmeg over it, and serve it up for a Side-plate. Or you may poach your Eggs, and lay them on the Toast; or toast your Toasts crisp, and pour a little boiling Water over it, season it with a little Salt, and then lay your poached Eggs on it.

Tomorrow: Fat Cake for the Queen.


Quotation for the Day …

This special feeling towards fruit, its glory and abundance, is I would say universal.... We respond to strawberry fields or cherry orchards with a delight that a cabbage patch or even an elegant vegetable garden cannot provoke. Jane Grigson
Posted by The Old Foodie at 7:51 AM