All at sea with sausage. 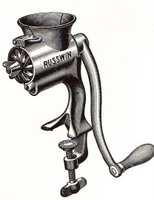 You would have been in sausage (and pickle) heaven if you had been a passenger on the good ship “Admiral” of the Deutsche Ost-Afrika Line on this day in 1912.

The menu for luncheon, exactly as it was written, was:

The problem is that we really cant reliably predict exactly what the individual sausages were, because over the centuries the names have become fairly randomly applied – and often no longer reflect their origins, as we saw in the story on “baloney”*. How many sausage fans would still feel the same about “Cervela” (a.k.a “Saveloy”) if they knew the name came from its original main ingredient – cervella, i.e brain?

Here is a recipe from the ancient Roman gourmet Apicius (Vehling translation):

Pound eggs and brains, pine nuts, pepper, broth and a little laser**with which fill the casings . First parboil the sausage then fry them and serve.

And now an interpretation from Mistress Margaret Dods, from her “Cook and Housewife’s Manual” (1856). The author who gave us “Imitation Bologna”, does not qualify her recipe for “Savaloys” at all.

Take a piece of tender pork, free from skin and gristles, and salt it with common salt and a little saltpetre. In two or three days mince it, and season with pepper, chopped sage, and a little grated bread. Fill the gut, and bake the savaloys for a half-hour in moderate oven. If to be eaten cold, let the meat lie a day or two longer in the salt.
Obs. Sausage meat may be broiled in a veal-caul, as a cake, first pressing it to a flat shape. It may be reddened with a little saltpetre. If to be used immediately, oysters, mushrooms, &c., may be put to sausages to heighten the flavour.

* The baloney story of December 19th was retrospectively posted in the March archive; you will have to use Ctrl+F after you click here, if you wish to read it.
**laser is now apparently extinct; it may have been similar to asafoetida.

Doctor, do you think it could have been the sausage?" Supposed last words of the French poet Paul Claudel (1868-1955).
Posted by The Old Foodie at 5:00 AM

I think I must read these menus just to be grossed out and happy that all I have to deal with is a Lean Cuisine pizza.

Hello Abi: some of these menus are pretty scary I agree. But sometimes I think we get too carried away today with minimalist cuisine. There must be a happy medium somewhere.

I agree with Abi. It's amazing that people survived back then, considering what they ate. No wonder life expectancy was so low. Refrigeration alone probably added 10 years! Another great post O.F.

Just in case you have not seen it: Patience Gray's 1964 cookbook for the Blue Funnel Line

Thanks mmw! I cant resist another book, I am going to order before any of you can yell "All Aboard".