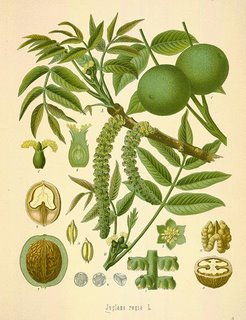 A seventeenth century Mistress of Capels Manor in Enfield, England kept a “receipt book” and inside she inscribed: “Madam Susanna Avery, Her Book, May ye 12th, Anno Domini 1688”.

She included this recipe:

To Pickel Wallnutts Green Let your nutts be green as not to have any shell; then run a kniting pin two ways through them; then put them into as much ordinary vinegar as will cover them, and let them stand thirty days, shifting them every too days in ffrech vinegar; then ginger and black peper of each ounce, rochambol* two ounces slised, a handfull of bay leaves; put all togeather cold; then wrap up every wall nutt singly in a vine leaf, and put them in putt them into the ffolloing pickel: for 200 of walnutts take two gallans of the best whit vineager, a pint of the best mustard seed, fore ounces of horse radish, with six lemons sliced with the rins [rinds]on, cloves and mace half an ounce, a stone jar, and put the pickel on them, and cork them close up; and they will be ffitt for use in three months, and keep too years.

No-one pickles their own walnuts anymore. No-one does much pickling of anything, that’s part of the problem, but walnuts are problematic even in the hands of enthusiastic picklers. That’s the problem in a nut-shell (pun intended) – the hands. How on earth did Mistress Avery do it without rubber gloves to protect her lily-white gentlewoman’s hands? Walnuts contain walnut stain – of the very same dark colour as is applied to wood, and it wont wash off, it has to wear off.

Nonetheless, they must have been considered worth the effort, judging by the number of recipes in old books. Mrs Raffald (1769) gives variations to pickle them black, green, or “an olive colour”, and also notes:

You may make exceedingly good catchup of the alegar** that comes from your walnuts by adding a pound of anchovies, one ounce of cloves, the same of long and black pepper, one head of garlic, and half a pound of common salt to every gallon of your alegar. Boil it till it is half reduced away and skim it very well. Then bottle it for use and it will keep a long time.

**Alegar is sour ale ( i.e vinegar formed from the fermentation of ale)

So, go make some!

On Monday: Bordeaux and the rest.

On Walnuts: “With onions, salt, and hony, they are good against the biting of a mad dog or man, if they be laid upon the wound”. From John Gerard’s Herbal (1633)
Posted by The Old Foodie at 6:58 AM

Here you'll find some items I made from pickling green walnuts in 1994.

And i firmly believe that green or white walnuts refer to the English variety not "Black"walnuts.

We have five English walnut trees and harvest hundreds of pounds a year. I never imagined pickling the green walnuts, what a novel (or not so novel as the case may be) idea. I don't think there would be a problem with staining, as the green walnuts are green and smooth. If you open them, they are white on the inside along with the nut. It's when the green protected coating turns dark brown that there is a problem. The inside between the outer layer and the nut is almost black, and stains everything.

My mistake. Apparently the green walnuts can stain! Saw this on another site:

"In the UK pick walnuts at the end of June before the hard nut forms inside the green shiny case. Pick a bucketful and, wearing rubber gloves, prick each walnut a couple of times with a fork. Watch out for the clear juice this produces. It is deceptive, as it stains a dark brown."