The elegance of beans. 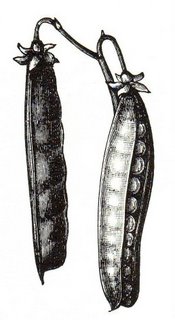 Vincent van Gogh was voluntarily confined in the asylum at Saint- Rémy in 1889 after a mental breakdown. He but kept up his correspondence with his brother while he was there, and on this day wrote:

The food all right as far as it goes. It tastes a bit musty, of course, as in a cockroach-infested restaurant in Paris, or in a boarding-house. The poor wretches here, having absolutely nothing to do (not a book, nothing more to distract them than a game of boules or a game of draughts), have no other daily distraction than to stuff themselves with chickpeas, haricot beans, lentils and other groceries and colonial produce, in set quantities and at stated hours. As the digestion of these foodstuffs offers certain difficulties, they fill their days in a way as offensive as it is cheap.

We have already touched on this entertaining aspect of beans in an earlier Old Foodie story, so it is time to re-dress the balance, and look for the elegance that is also in them. Vincent was in France, and there is no doubt that the French do elegance very well, so here are a couple of nineteenth century recipes for French-style beans.

From “366 Menus and 1200 recipes”, a book by the Baron Brisse, nineteenth century food journalist for La Liberté:

French beans and haricots à la maitre d’hôtel.
Boil equal quantities of French beans and fresh young haricot beans in salt and water; when cooked, drain and place in a dish near the fire. Melt a large lump of butter, flavour with chopped herbs, salt and pepper, warm the beans in this, and serve very hot.

Capsicum butter.
Pound some dried capsicums, and stir into butter; it is generally used for sandwiches.

French beans with white sauce.
Cut up your French beans; soak them in cold water, and boil in boiling salt and water; when done, plunge them into cold water and drain. Warm some chopped onions in fresh butter, but do not brown them; when nearly cooked, stir in a little flour, salt, pepper, chopped parsley, chives, and a wine-glassful of stock, add the beans, and when boiling, thicken the sauce with yolks of egg, and flavour with lemon juice. Do not let the sauce be too thin.

See the earlier posts on April 25th Beans Means Ventosyte, and another food story about Vincent van Gogh at An Admirable Receipt for Eggs.

To be a gourmet you must start early, as you must begin riding early to be a good horseman. You must live in France, your father must have been a gourmet. Nothing in life must interest you but your stomach. Ludwig Bemelmans
Posted by The Old Foodie at 7:43 AM