To the Women of the United States. 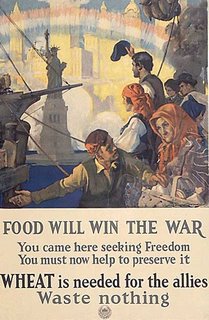 When the United States entered WW I in 1917, Herbert Hoover was made Food Administrator, and his catch-cry was “Food will win the war!”. There was no doubt that the responsibility for this part of the war effort would fall to the housewife, and on May 5th 1917, Secretary Houston of the Department of Agriculture made an appeal “To the Women of the United States”.

In stirring patriotic prose, he urged every woman to “help to feed and clothe our armies and help to supply food to those beyond the seas by practicing effective thrift in her own household”, and to “Make economy fashionable lest it become obligatory”.

Stirring patriotic prose to assist housewives “to make of the housewife apron a uniform of national significance” also appeared in cookbooks such as “Daily Menus for War Service” (1918) by Thetta Quay Franks. The book included three alternative “war menus” for each day of the year – more expensive, medium price, and cheaper – with recipes to help cater for meatless, wheatless, and porkless days.

The cheap menu option for May 5th was:

So how about putting on your aprons and trying a couple of the recipes for the day?:

On Monday: All at sea with sausage.

What science demands more study than Cookery? You have not only, as in other arts, to satisfy the general eye, but also the individual taste of the persons who employ you; you have to attend to economy, which every one demands; to suit the taste of different persons at the same table; to surmount the difficulty of procuring things which are necessary to your work; to undergo the want of unanimity among the servants of the house; and the mortification of seeing unlimited confidence sometimes reposed in persons who are unqualified to give orders in the kitchen, without assuming consequence, and giving themselves airs which are almost out of reason, and which frequently discourage the Cook. Louis Eustache Ude.
Posted by The Old Foodie at 6:12 AM

Love the Old Foodie. You might enjoy these war posters, many of which have a food theme. Have to wonder if some of the surpluses of grain in the US, thence corn sweeteners, biggie fries, and big butts, date to this promotion of Big Ag.
http://fax.libs.uga.edu/wwpost/
(You may need to download a plugin.

Hello Fesser
Thanks for the site - I'm always looking for references.

I think there must be a book in that idea "101 things to do with a grain surplus". What do you think?