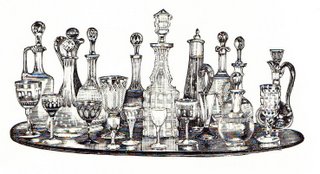 A Colonial Conference was held in England in May 1907, and one of the many formal events was a kosher banquet to the Colonial Premiers, given by “Messrs. F. Barnett and Co., who are famed throughout the Jewish world as purveyors of comestibles prepared in the orthodox manner”. According to the report in the Penny Illustrated paper on this day in 1907: “The banquet will be given to celebrate the arrival of the first consignment of colonial meat that may be sold with the approval of the London Jewish Ecclesiastical Board. … The concession obtained by Messrs. Barnett is one of great importance to London Jews, who have been paying higher prices for meat than their Gentile neighbours”.

SWEETBREAD CROQUETTES
Cut the boiled sweetbreads into small dice with a silver knife. Mix with mushrooms, using half the quantity of mushrooms that you have of sweetbreads. Use two eggs in the sauce.

FISH PIQUANT
Cook any large fish in salt water - salmon is particularly nice prepared in this style--add one cup of vinegar, onions, celery root and parsley. When the fish is cooked enough, remove it from the fire, kettle and all - letting the fish remain in its sauce until the following sauce is prepared:
Take the yolks of two eggs, one-half teaspoon of Colman's mustard (dry), salt, pepper, a tablespoon of butter, a tablespoon of vinegar, one-half glass water and some fish gravy. Boil in double boiler until thick. Take some parsley, green onions, capers, shallots and one large vinegar pickle and some astragon, chop all up very fine; chop up the hard-boiled whites separately and then add the sauce; mix all this together thoroughly, then taste to see if seasoned to suit.

A silver knife is often specified in old books for cutting up fruit, to prevent it discolouring but why for the sweetbreads? Any ideas?

Tomorrow: To the Women of the United States.

At a dinner-party one should eat wisely but not too well, and talk well but not too wisely. Somerset Maugham.

There are some wonderful recipes for scones from the cookbook of a Jewish migrant to Australia in the 1850's at Even in a little thing.

cute. no idea about why the silver knife for sweetbread.