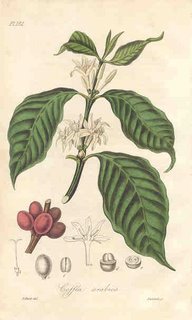 A Bavarian physician and botanist called Leonhard Raowolf set off with a friend on this day in 1573 on a three year journey to the East, specifically to seek new medicinal plants. He travelled through Syria, Armenia, Constantinople, Baghdad and Jerusalem, recording all sorts of details about day-to-day life in these very foreign places. He was the first European to describe the use of coffee, which he saw in Aleppo:

A very good drink they call Chaube that is almost as black as ink and very good in illness, especially of the stomach. This they drink in the morning early in the open places before everybody, without any fear or regard, out of clay or China cups, as hot as they can, sipping it a little at a time.

One “first” always precipitates a series of others, and the new drink did not take long to start its world take-over. The first record of coffee-drinking in England was in 1637, in the diary of John Evelyn who noted:

… there came in my time to the college one Nathaniel Conopios, out of Greece. He was the first I ever saw drink coffee.

The university town of Oxford was also the location of the first coffee house, in 1650. London followed, with the first establishment there opening in 1652 in St. Michael's Alley, Cornhill. It was widely advertised for its medicinal benefits, with the first known coffee advertisement saying, in part:

... It suppresseth Fumes exceedingly, and therefore good against the Head-ach, and will very much stop the Defluxion of Rhuems, that distil from the Head upon the Stomack, and so prevent and help Consumption and the Cough of the Lungs. It is excellent to prevent and cure the Dropsy, Gout and Scurvy.

It seems fitting to give the first known instructions for the roasting of coffee, from 1662.

The coffee berries are to be bought at any druggist, about three shillings the pound; take what quantity you please and over a charcoal fire, in an old pudding pan or frying pan, keep them always stirring until they be quite black; and when you crack one with your teeth that it is black within as it is without. Yet if you exceed then do you waste the oyl, which only makes the drink; ... The berry prepared as above, beaten, and forced through a lawn sive is then fit for use.

The coffee falls into your stomach and straightaway there is a general commotion. Ideas begin to move like the battalions of the Grand Army on the battlefield when the battle takes place. Things remembered arrive at full gallop, ensign to the wind." - Balzac, "Treatise on Modern Stimulants"
Posted by The Old Foodie at 7:35 AM