The legality of tomatoes. 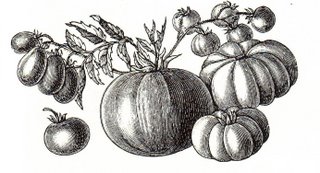 After a six-year battle a U.S. court decided on this day in 1893 that the tomato was a vegetable. This was in complete disregard for the science of botany, many experts, and numerous dictionaries, but with complete and touching regard for “the common language of the people”, culinary convention (“any plant or part thereof eaten during the main dish is a vegetable … If it is eaten at any other part of the meal it is a fruit”) and - not surprisingly- the economics of the tomato trade.

The problem had started with the Tariff Act of 1883, which placed 10% duty on imported vegetables but not fruit. In the interest of raising revenue, the NY Customs department declared the tomato a vegetable. The ruling was challenged in 1887 by an importer attempting to recoup duty paid on tomatoes brought in from the West Indies. Six years later the decision was finally made, and he lost.

There are many other examples of botany and cookery and the law defining things differently. The pumpkin is in the same predicament as the tomato, it is botanically a fruit, although usually thought of as a vegetable. Does it attract duty I wonder? The reverse story is that of rhubarb – botanically a vegetable, but culinarily used as a fruit. Bananas grow on giant herbs, not trees, and the strawberry itself is not a true fruit, it is merely the red fleshy “pseudocarp” (so technically is a vegetable) which holds the true fruits – what we call the tiny “seeds”. Is that clear?

In the midst of all this confusion, the comforting certainty is that the tomato is a very versatile food, and in spite of the U.S court decision, it can be cooked as a fruit as well as a vegetable. Here is an example, from “Domestic Cookery, Useful Receipts, and Hints to Young Housekeepers” by Elizabeth Lea (1869).

Green Tomatoes for Pies
Pick the green tomatoes before they are much frosted; scald them and take off the skins; put them in your kettle and let them boil for half an hour; cut them up, and put in a pound of sugar to three pounds of tomatoes, and let them cook for half an hour longer; season them with the juice and peel of a lemon, and put them away in jars. They make very good pies in the winter, and resemble gooseberries.

What I love about cooking is hat after a hard day, there is something comforting about the fact that if you melt butter and add flour and then hot stock, it will get thick! It's a sure thing! It's a sure thing in a world where nothing is sure; it has a mathematical certainty in a world where those of us who long for some kind of certainty are forced to settle for crossword puzzles. Nora Ephron.
Posted by The Old Foodie at 4:50 AM