One of the earliest restaurant reviewers was Lieut.-Col. Newnham-Davis, who ate his way around London at the end of the nineteenth-century. He compiled his reviews in a book called ‘Dinners and Diners: Where and How to Dine in London’, and in it he describes his meal at a kosher restaurant in Bloomfield St called Goldstein’s on this day in 1899. He explained his choice thus:

'The raison d’être of the dinner was this: Thinking of untried culinary experiences, I told one of the great lights of the Jewish community that I should like some day to eat a “kosher” dinner at a typical restaurant, and he said that the matter was easily enough arranged; and by telegram informed me one day last week that dinner was ordered for that evening at Goldstein’s restaurant in Bloomfield Street, London Wall, and that I was to call for him in the City at six.'

Even this enthusiastic trencherman was a little fazed by the quantity of food:

'When I looked at the above I groaned aloud. Was it possible, I thought, that any human being could eat a meal of such a length and yet live? I looked at my two companions, but they showed no signs of terror, so I took up knife and fork and bade the waiter do his duty.'

The Colonel manages to perform his own duty admirably, but finishes by saying: ‘I think that a “kosher” dinner, if this is a fair specimen, is a succession of admirably cooked dishes. But an ordinary man should be allowed a week in which to eat it.’

Like all good reviewers, the Colonel looked upon his dining experiences as an opportunity to learn. At the outset he says 'I had asked to have everything explained to me.' His first puzzle came very early in the meal with the “Solomon Gundy”, which sounds unnervingly like a human name. Now, although I am not Jewish, I am quietly confident that human flesh is not, and has never been kosher. So what then, is “Solomon Gundy’? The Colonel says:

‘Of the hors-d’oeuvre, Solomon Gundy, which had a strange sound to me, was a form of pickled herring, excellently appetising.’

In other words it is a variant spelling of salmagundy (or salad-magundy, salmogundy, salmagundi ….) – a piece of information which takes us marginally closer to knowledge but still a long way from wisdom. The OED does seem to have trouble with a lot of food words, and this one is yet another with ‘obscure origins’, although an Italian parentage is suspected. It gives the definition as ‘A dish composed of chopped meat, anchovies, eggs, onions with oil and condiments.’

There are many recipes for salmagundy in seventeenth and eighteenth century books, and just about anything goes as far as ingredients are concerned, although herrings and anchovies do seem to predominate as they did in the Colonel’s meal.

The following recipe from 1764, is from English Housewifery Exemplified by Elizabeth Moxon. She specifies it as being suitable for Lent, but it would seem to the non-Jewish me to be also entirely suitable for a kosher meal. I eagerly await comment from Jewish readers.

To make SOLOMON GUNDY to eat in Lent
Take five or six white herrings, lay them in water all night, boil them as soft as you would do for eating, and shift them in the boiling to take out the saltness; when they are boiled take the fish from the bone, and mind you don’t break the bone in pieces, leaving on the head and tail; take the white part of the herrings, a quarter of a pound of anchovies, a large apple, a little onion shred fine, or shalot, and a little lemon-peel, shred them all together, and lie them over the bones on both sides, in the shape of a herring; then take off the peel of a lemon very very thin, and cut it in long bits, just as it will reach over the herrings; you must lie this peel over every herring pretty thick. Garnish your dish with a few pickled oysters, capers, and mushrooms, if you have any; so serve them up.

The story on this day in 2005 was about Kosher banquet was held during the Colonial Conference in England in May 1907. 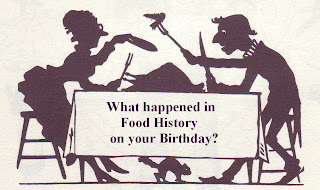 If you want to find out what happened in Food History on your birthday (or someone else's) , buy a virtual raffle ticket for prize AP13 in the Menu for Hope campaign. Lots of other great prizes too - meals at some of the best restaurants in the world, books, wine, hotel stays, photography lessons, web designs. To find out more, click on the images in the sidebar.
Posted by The Old Foodie at 5:24 AM

The gentleman also participated in another book - The Gourmet's Guide to Europe is the title, I believe. Here's a link to the Gutenberg edition:
http://www.gutenberg.org/files/18854/18854-h/18854-h.htm

Thanks Nene - I knew he had written the book - but not that there was a Gutenberg edition.