In Memory of a Mistress. 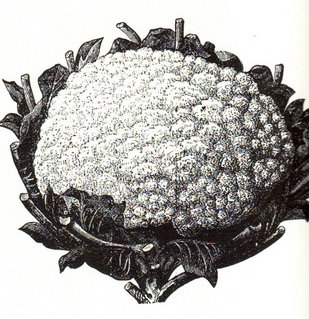 The beautiful Jean Becu, Comtesse Du Barry was guillotined on this day in 1793, in her fiftieth year. She did not go quietly - weary and accepting - like Marie-Antoinette. In her last hysterical moments she wept and pleaded with the executioner for "Encore un moment, monsieur le bourreau, un petit moment". A sad and undignified end for a beautiful woman who had had an undignified beginning as an illegitimate seamstress but – thanks to her great beauty - rose to enjoy a powerful and extravagant life as a courtesan and the last mistress of Louis XV.

Her name has become associated with a number of dishes based on cauliflower. There was certainly a fashion a century or so later for naming dishes after the rich and famous, but why cauliflower and Mme. Du Barry? Perhaps the white cauliflower suggested her fine pale skin, or powdered wig – or the complicated design of the wig itself? Perhaps it is the sheer, velvety voluptuousness of the Mornay sauce that is a traditional part of the garnish “à la du Barry”?

Before we move on to recipes, let us pause and consider the cauliflower itself. Cauliflower is one of the cultivars of Brassica oleracea, which also encompasses cabbage, broccoli, kale, collard greens, kohlrabi and Brussels sprouts. In other words, all of these important vegetables are exactly the same species. Hundreds, probably thousands of years of tweaking by horticulturalists have allowed one or other part of the plant to be the desirable feature. In the case of the cauliflower, it is the flowering head of the plant which has been encouraged.

Cauliflower is usually sold today stripped of its leaves. The leaves indicate the freshness of the vegetable (perhaps that is our clue to why they are removed) and they are also quite edible in their own right. Mrs Raffald got it right in the simple recipe for cooking cauliflower in her book “The Experienced English Housekeeper” (1769).

To Boil a Cauliflower.
Wash and clean your cauliflower, boil it in plenty of milk and water (but no salt) till it be tender. When you dish it up lay greens under it, pour over a good melted butter and send it up hot.

The traditional garnish “à la Dubarry” came later, historically. According to the Larousse Gastronomique it consists of “Small flowerets of cauliflower covered with Mornay Sauce, sprinkled with grated cheese and breadcrumbs and browned.” The other well-known cauliflower dish with her name is a cream soup, but there are also non-cauli dishes with her name. For example there is “Eggs Du Barry” (hard-boiled eggs with anchovy, chives, and white sauce), and “Fricasee of Fowls à la Dubarry” which we featured in a previous story.

Finally, while we contemplate her fate and her culinary legacy, there is:

Soup as a weapon.

We have had several previous stories on the French Revolutionary era.

““A Lunch too Leisurely”.

On the subject of royal mistresses, Mme Fontanges, a mistress of Louis XIV also has a dish named in her honour. It was featured on the menu of the famous “Dinner of the Three Emperors”.

Cauliflower is cabbage with a college education. Mark Twain.
Posted by The Old Foodie at 5:08 AM

In Holland (where I live), cauliflower is 'strontviool' - literally, 'sh*t violet.' There are two possible explanations. The first is that cauliflowers grow on a lot of manure; the second pertains to the smell of a cooking cauliflower. In any case, no amount of sauce will disguise the taste. Yuck! I'd much rather have broccoli. With cheese sauce.

Although on reflection, the proper name used for cauliflower is bloemkool; perhaps the strontviool nickname is specic to the village where I live, or possibly the Frisian province rather than the entire country. In any case, it's traditional here to eat cooked cauliflower sprinkled with nutmeg, then served with white sauce.


I like the way on how you put up your blogs. Wonderful and awesome. Hope to read more post from you in the future. Goodluck. Happy blogging!