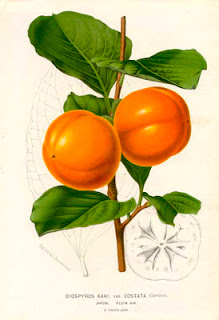 Things were pretty grim for Washington’s forces at Valley Forge in December 1777. The surgeon, Albigence Waldo had his own ‘medical’ problem too, in addition to plain old hunger. Luckily both were solved on this day, with the assistance of some fruit. His diary reads:

‘Quiet. Eat Pessimmens, found myself better for their Lenient Opperation. Went to a house, poor and small, but good food within - eat too much from being so long Abstemious, thro' want of palatables. Mankind are never truly thankfull for the Benefits of life, until they have experienc'd the want of them. The Man who has seen misery knows best how to enjoy good… ’

Much as we might be sympathetic to the relief offered to Waldo’s bowels by the persimmons, it is frustrating for us as curious students of food history that he makes no comment about the rest of the meal. We can be safe in assuming however that the fruit was very ripe indeed, as otherwise they are traumatically astringent and mouth puckering. Captain John Smith of the English settlement in Virginia early in the seventeenth century said:

‘Plums there are of three sorts. The red and white are like our hedge plums; but the other, which they call Putchamins, grows as high as a Palmeta, the fruit is like a Medler, it is first green, then yellow, and red when ripe. If it be not ripe, it will drawe a man’s mouth awrie, with much torment; but when it is ripe, it is delicious as an Apricocke.

Putchamin is the Algonquin Indian word from which we get persimmon, and it appears from a report by Hernando de Soto in 1541 that Indians in the Mississippi region made it into “bread”. The variety of persimmon enjoyed by these intrepid explorers and early settlers is what we now call Diospyros virginiana. Another variety originally from China is Diospyros kaki – or simply kaki – which is inherently sweeter and less astringent, and is certainly the most popular today.

If you want to feel like a pioneer, you could make the suggested variation of this pumpkin bread from Dishes & Beverages Of The Old South by Martha McCulloch-Willia (1913), or the beer, or both!

Pumpkin Bread: (Pioneer.)
Sift a pint of meal, add salt to season fully, then rub through a large cupful of stewed pumpkin, made very smooth. Add half a cup melted lard, then mix with sweet milk to a fairly stiff dough, make pones, and bake crisp. Mashed sweet potato can be used instead of pumpkin, and cracklings, rubbed very fine in place of lard. Folks curious as to older cookery, can even make persimmon bread, using the pulp of ripe persimmons to mix with the meal - but they will need the patience of Job to free the pulp properly from skin and seed.

Persimmon Beer:
The poor relation of champagne - with the advantage that nobody is ever the worse for drinking it. To make it, take full-ripe persimmons, the juicier the better, free them of stalks and calyxes, then mash thoroughly, and add enough wheat bran or middlings to make a stiffish dough. Form the dough into thin, flat cakes, which bake crisp in a slow oven. When cold break them up in a clean barrel, and fill it with filtered rainwater. A bushel of persimmons before mashing will make a barrel of beer. Set the barrel upright, covered with a thin cloth, in a warm, dry place, free of taints. Let stand until the beer works--the persimmon cakes will rise and stand in a foamy mass on top. After three to four weeks, either move the barrel to a cold place, or rack off the beer into bottles or demijohns, tieing down the corks, and keeping the bottled stuff very cool. The more meaty and flavorous the persimmons, the richer will be the beer. Beware of putting in fruit that has not felt the touch of frost, so retains a rough tang. A very little of it will spoil a whole brewing of beer. If the beer is left standing in the barrel a wooden cover should be laid over the cloth, after it is done working. Fermentation can be hastened by putting in with the persimmon cakes a slice of toast dipped in quick yeast. But if the temperature is right, the beer will ferment itself.
Monday’s Story …

"Sex and Science in the Kitchen"