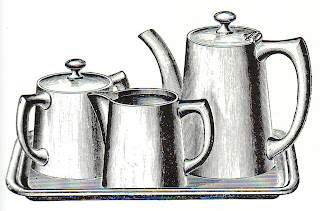 Wherever it has been introduced it has spelled revolution. It has been the world's most radical drink in that its function has always been to make people think. And when people think, they become dangerous to tyrants. William Ukers.
Posted by The Old Foodie at 5:22 AM

Let us not forget Bach's Kaffee Kantata - "Oh, how sweet the coffee tastes, more delicious than a thousand kisses, mellower than muscatel wine!"

Though to be honest, I prefer tea myself.

I've become enamoured of 'white tea'lately - it doesn't have the tannic bite of a black tea, but it has plenty of tea flavor. My favorite tea, though, is English breakfast tea (Twinings). Yours?

Favourite? If it's tea, I like it! English breakfast is my favourite "ordinary" tea (or maybe its Darjeeling, I cant decide), but I drink a lot of green tea these days. A lot. I recently bought a variation on Earl Grey called "Girlie Grey" which was delicious too. Different teas for different days, moods, occasions. Must do a story on tea.