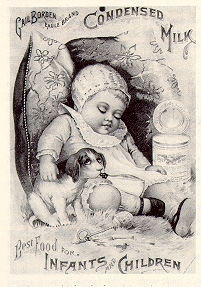 The man who invented condensed milk was born on this day in 1801. Gail Borden had many careers in his life –surveyor, cattleman, customs agent, newspaper editor, real estate salesman, and civic official – but is best known as an inventor. He had little formal education and no scientific training, but became very interested in food preservation in the 1840’s. This interest may have been precipitated by news of the gruesome fate of the “Donner Party” – a group of westbound settlers who became stranded in the Sierra Nevada over the winter of 1846-7, some of them surviving by eating their dead companions.

Borden spent years perfecting a “meat biscuit” or “portable desiccated soup-bread” which won a gold medal at the Great Council Exhibition in London in 1851, but ultimately was a commercial failure. The idea for a preserved form of milk came on his voyage home after the Exhibition. This time he was moved by the plight of babies who sickened because the cows kept aboard for that purpose were unable to provide sufficient milk. He was certainly persistent. His patent application for condensed milk was rejected three times before being accepted in 1856, after a recommendation from the editor of the Scientific American. The product was well timed, and business never looked back after the Civil War.

At some point in time, cooks realised that the heavily sweetened, thick milk – itself a sort of canned dairy confection – could be very useful in baking. The world has good reason to be grateful to the person who first thought of converting it to caramel pie filling, but perhaps less grateful to the one who first thought of using it as the base for a salad dressing. I am not sure when this latter invention was first perpetrated upon the world, and would be grateful to any readers who can find an earlier instance than the one in Alice Bradley’s little book “For Luncheon and Supper Guests”, published in 1923.

Alice’s book contained ten menus, with a total of 100 recipes. She avoided the dilemma of what to do with the leftover condensed milk when a recipe calls for only part of a can by ensuring that another recipe in the same menu used the exact remaining amount. No more “cook’s treat’ of furtive spoonfuls straight from can to mouth every time the fridge door is opened.

So, for Menu VII for luncheon or supper, which was:

- she uses exactly one can of condensed milk in the following pair of recipes:

A Whale of a Feed.

Condensed milk is wonderful. I don't see how they can get a cow to sit down on those little cans. Fred Allen.
Posted by The Old Foodie at 5:38 PM

The baby in the picture looks SO peaceful and contented! Maybe I should try my baby on condensed milk :-) No, not really.

I remember my mother feeding my younger sister on watered down condensed milk. And my motheralso made the salad dressing but without the egg.

Hello Barbara - have you ever made the dressing?
And Hello Laura - there is so much sugar in the condensed milk that I dont think anything would curdle it!

Nice post Janet. It seems these days canned milk is rather looked down upon by cooks (read food snobs) but it really was a life-saver during the depression here in America. It is an acquired taste, though.

Yes, it was my job to make the dressing when I was a child. It was then poured over the salad which had been constructed like a piece of art. That was my job too! Sounds like meme in there somewhere!