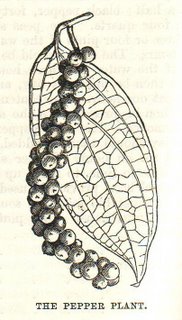 Almost two hundred years of lucrative pepper trading ended for the city of Salem on this day in 1846, when the brig Lucilla entered the harbour carrying the last bulk cargo of pepper.

The Salem pepper trade began with a man called Elihu Yale. Yale was born in Massachusetts but was taken to England at the age of three years, never to return to America. He made his fortune working for the East India Company in its heyday, and a large part of his success was the establishment of the pepper trade out of the port of Salem. In 1654 he sent representatives to Aceh in northern Sumatra in 1654, with the aim of breaking the European monopoly of the lucrative spice trade.

The venture was successful almost beyond the dreams of avarice. In 1806 one single consignment of five hundred tons of pepper was valued at over one million pounds. As an acknowledgement of the source of its wealth, the seal of the City of Salem still bears an image of an Achenese person in traditional dress. On a different scale altogether, as an acknowledgement of his financial backing, a college back in the country of his birth, in New Haven, Connecticut, would be re-named in Elihu Yale’s honour.

Pepper (Piper nigrum) probably originated on the Malabar Coast of India in what is now called Kerala. It was known to the ancient Romans, and returning crusaders no doubt brought some of the precious and tasty spice back to Europe after their adventures, but it was not until the fifteenth century that commercial trade had its beginnings. Seafaring know-how had advanced sufficiently by then to make it technically possible, and the huge demand for spices provided the impetus for voyages of exploration to seek out the sources – the explorations that ultimately changed the map of the known world.

Black, white, red, or green – the peppercorns that we know are all derived from the same plant, the final product depending on the details of harvesting and processing. We think of it as a cheap, everyday spice but it was once, quite literally, worth more than gold. It is said that Alaric the Visigoth demanded three thousand pounds of pepper as part of his ransom from the citizens of Rome when he besieged their city in the year of 408. It is ironic that today a “peppercorn rent” today means a nominal sum, but once upon a time, when debts were sometimes actually paid in peppercorns, it may have meant a very hefty rent indeed.

Today, in recognition of the origin of the pepper in India, and the great Empire-building that occurred as a result of the search for it and other spices, we have a very Anglo-Indian recipe from the Victorian era.

Pepper Water (for flavouring).
Strain the juice of a fresh lemon into a pint and a half of cold water. Slice an onion and pound it in a mortar, with twelve peppercorns, three cloves of garlic, a table-spoonful of curry powder and a dessert-spoonful of salt. Put all into a saucepan, bring the liquid to the point of boiling, cover closely, and let it simmer gently for a quarter of an hour, then strain it through muslin. Put with it a small onion which has been chopped small and fried lightly in butter. Boil up once more, and the pepper water is ready to be bottled. Cork closely, and store in a cool, dry place. In India, where this recipe is in great repute, a piece of tamarind is substituted for the lemon juice. Probable cost, 2d. per pint.
[From Cassell’s Dictionary of Cookery (1870’s)]

Diet for a Complexion.

Americans can eat garbage, provided you sprinkle it liberally with ketchup, mustard, chili sauce, Tabasco sauce, cayenne pepper, or any other condiment which destroys the original flavor of the dish. Henry Miller.

REMINDER: you have about twelve hours left (from the time of this posting) to enter the QUIZ and win the prize!
Posted by The Old Foodie at 5:28 AM

I've got the Cassell's Dictionary and wondered how old it was ... you've answered my wonderings! Isn't it a wonderful book?!

Hi Stephanie - I agree, it is a wonderful book. There were many editions, starting in the 1870's. I cant remember now how I approximately dated mine! I also have the 1910 edition (which is dated) but it is not so pretty - the font is quite ugly.