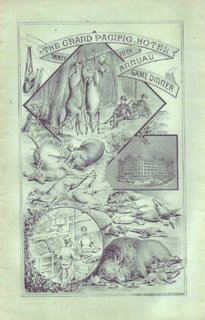 The twenty-fifth Annual Game Dinner was in Chicago on this day in 1880. The host was the hotel magnate John Burroughs Drake who held the event for thirty years, initially at the Tremont House then at his Grand Pacific Hotel (after he built it 1873 for a cool $1.5 million).

Wild game dinners became fashionable for the rich and powerful in the second half of the nineteenth century in North America (which proved to be a great thing for trappers and transporters, but not so good for several species of fauna), and no-one did it bigger or better than John B. Drake. Five hundred guests sat down to the following spectacular bill of fare on this day in 1880:

The New York Times described “The Brilliant Affair” down to the typographical details of the bill of fare itself:

“The bill of fare was gotten up beautifully in a typographical way. The cover represented hunting scenes and the Grand Pacific Hotel in its exterior and kitchen. The back was a monogram in gold bronze, topped with an elk’s head. It was printed on Nile green calendar paper.”

It would quite literally be impossible to repeat that dinner today. I say that advisedly, thanks to a recent article by Frank Bruni in the New York Times, who says “Federal law forbids the commercial sale of indigenous American wildlife that isn’t being raised in special circumstances.” So, anything “wild” on a New York menu is either “quasi-wild”, or the breed has been given that name (as in “wild boar”), or it was actually wild but was shot elsewhere, such as Scotland, where post-mortem inspections are carried out in a manner which satisfies the American authorities.

All of which leaves me with two dilemmas. I do not wish to get a reputation for political incorrectness in giving recipes for endangered species (such as the whale, last week), or for risking public health in giving recipes for potentially disease-ridden, pellet-ridden beasties and birdies. I must stand firm however, in telling my stories.

The second, more serious dilemma is – how on earth do I choose which dish to feature from among so many?

This is how I do it. I avoid the issue. It is still, as far as I am aware, legal to eat your own personally hunted game in America (within the usual limitations of licences, seasons etc), so many of you huntin’ shootin’ fishin’ types must have your own particular methods of preparation. If you are willing to share, please place your recipes in the comments section. With some collaboration, for the sake of historic interest, we could have a virtual banquet, or at least an interesting treatise.

For my own contribution since I live "elsewhere", I give you a recipe for the Burgundy Sauce. Or rather, it is for Bordelaise Sauce, but I am sure Charles Ranhofer would understand if you substitute Burgundy for the Bordeaux (or would he?).

Bordelaise Sauce.
Put into a saucepan half a bottleful of Bordeaux wine, adding a small garnished bouquet containing a little garlic, half a bay leaf, and two cloves; a quarter of a pound of the peelings and stalks of some chopped mushrooms, one tablespoonful of blanched shallots lightly fried in three spoonfuls of oil, one pint of espagnole sauce, half a pint of veal blond, and season with salt, mignonette and cayenne, boil, skim off the fat and then pour in half a bottleful of white wine, and when the sauce is reduced, strain it through a tammy and stir in a teaspoonful of chopped parsley; a pound of beef marrow cut in either squares or slices may be added to the bordelaise just when ready to serve. A simpler way is to brown some minced shallots in oil with a clove of crushed garlic, adding red wine and gravy, then reduce it to half, pour in the espagnole, boil, skim off the fat and serve. [From Charles Ranhofer’s “The Epicurean” 1894]

A trinity of cassoulets.

I am a strong partisan of second causes, and I believe firmly that the entire gallinaceous order (fowl) has been merely created to furnish our larders and our banquets. Brillat-Savarin.
Posted by The Old Foodie at 5:52 AM