Some rather expensive wine. 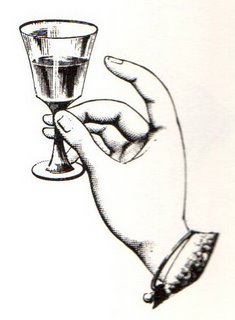 The oldest bottle of wine ever sold at auction was a bottle of 1646 imperial Tokay. The action happened at Sotheby’s in Geneva on this day in 1984, and the price was 1,250 Swiss francs (US$1,005 or AUD$1,314 or GB₤ 530). That’s quite a lot of money for what may well have been vinegar – not that the new owners would have intended to drink it, wine collectors collect, they don’t drink the stuff.

In 1985 at Christie’s in London, a world auction record for a single bottle of wine was recorded. The wine? A 1787 Château Lafite once owned by Thomas Jefferson. The price? A very cool US $157,500.

In March 2006 at Christie’s New York, a world record price for a case of wine was recorded when a six magnum box of 1985 Domaine de la Romanée-Conti was sold for US$170,375. The record remained for only a few short months until it was broken again twice within a space of minutes. This time the action was at Christie’s Los Angeles where in October a 12 bottle case of Mouton 1945 sold for US$ 290,000, followed by a 6 magnum case for US$ 345,000.

One big problem with big prices is that they attract big tricksters, and periodic wine fraud scandals keep making the news. The worst possible scenario happened to a billionaire art and wine collector from Florida, William Koch, when he bought several bottles of wine purporting to be from Thomas Jefferson’s Paris cellars (the bottle necks engraved with the great man’s initials to prove it) in 1988. It was not until he was asked to put one of the bottles on display in a Boston museum exhibit in 2005 that Koch was alerted to a possible fraud by museum experts who determined that the engraving was done using tools that did not exist in Jefferson’s time. The legal deliberations will no doubt continue for some time.

Wine fraud is easy in theory. Blending fraud is probably very common – take a little premium wine and blend with less premium, but sell at the premium price. Or change a few labels, add some dust, engrave bottle necks if wished, and auction to the highest bidder. No-one can taste test the product, and even if they did, there probably aren’t any tasting notes around for 1646 Tokay for comparison purposes.

It is all about intent of course, and “mock” beverages or food are not necessarily intended to be fraudulent, sometimes they are just designed as substitutes for an unavailable or unaffordable real thing.

William Graham of Ware wrote a book called “The art of making wines from fruits, flowers, and herbs, all the native growth of Great Britain. ... ” in 1770. He covered the standard beverages made from elderflower and turnip and so on, but also included some instructions for imitation wines.

To make Artificial Malaga, Canary Wine, &c.
Take a cask that has been well seasoned with right old Malaga; new trim it, and hoop it strong, leaving it open at one end, to which end a close cover must be fitted, to take off and put on at pleasure, and keep it in a seasons in a warm place; fll it with spring or conduit water, and to every gallon of water add six pounds of the best Malaga raisins well bruised, and sprinkle on every twenty gallons a handful of calx wine; then place the cover close, and keep it warm with cloths fastened about it, and so let it continue four or five days to work and ferment; after that open it, and see if the raisins are floating on the top of the water; and if you do find that they are, press them down again, and so do every four or five days, letting them stand three weeks or a month; then tap the vessel three or four inches above the bottom, and try if the liquor tastes; and if it does not, let it stand longer, till it has got the true flavour; then draw it off into another cask that has had Malaga in it, and to every twenty gallons put a pint of the best aqua vitae, a quart of Alicant wine, and two new-laid eggs beaten together, and let it stand in a vaulted cellar, or such-like place, till it be fit for drinking; if it want sweetness, put in a little fine loaf-sugar, and it will abundantly answer your expectation: and this dashed with a little white wine, or curious brisk pippin cyder, may pass for Canary.

And thus not only artificial Malaga may be made, but other artificial wines; for it cannot but be supposed that an ingenious person may, by these examples, invent and prepare other sorts of wines different from these in taste, for having once got the knowledge of the different herbs that bear a similarity to the different sulphur of the true wine, whether styptic, acid, mild, lusciouis, fat, or balsamic, so must the different sorts of wines be, whether Ribella, Tent, Rapadavia, Canary, or any others: as for white wine, or Rhenish, you may make them of sweeter or tarter ciders, as you find in the directions given for making artificial Claret, bating the colouring; though you must be at the labour and charge of fining them more, on purpose to keep up a good body.

The November 16th story in 2005 was “Tea Time Memories”, and featured Proust and madeleines and linden tea.