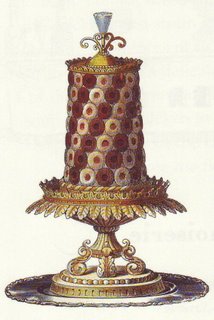 Marie-Antoinette was born on this day in 1755, and in view of the new movie about her, it is timely to consider her again - this time to focus on the pesky “Let them eat cake” story.

The movie has been criticised for its historic inaccuracies and its focus on the trivia and excesses of her life, but in doing so it is surely only following the precedent of “history” itself, which – being written as is usual, by the victors and propagandists - has not been kind to her. Imagine any 14 year-old girl that you know. Imagine sending her off to another country (where she was not fluent in the language) and marrying her off within a few days to a man she had never met. Give her the huge dual responsibilities of facilitating the diplomatic relations between the two countries, and of providing an heir and preferably also a spare. Imagine this child’s homesickness. Imagine her distress at the public ridicule she endured for not immediately producing an heir when the real reason was that her marriage was not able to be consummated until Louis submitted (years later) to minor surgery to correct a minor anatomical “glitch” that had made consummation impossible. This adolescent spent her first seven years as a virgin royal bride assuaging her homesickness and filling her time with all sorts of fun and games, as any teenager would. She does not seem to have been gratuitously unkind, and motherhood, when it finally happened, and maturity, when the years gave it, made her quite courageous.

Marie-Antoinette was accused of many things both during and after her life, for which there is no evidence. It is time to put to an end, once and for all, the malicious slander that she said of the hungry at the gate, when told they had no bread, “Let them eat Cake”. The phrase was written when she was a child, in a fable by the philosopher Rousseau who attributed it to a “great princess” to indicate her insensitivity to the poor. It was appropriated by post-revolutionary publicists and re-attributed to her to support their propaganda.

As far as the food depicted in the movie goes, until I have seen it I must restrain from judgement, but judging by some of the publicity stills, the cakes at any rate are far from historically accurate. “Cakes” in Marie-Antoinette’s time were leavened with beaten eggs, or yeast, and were baked in “hoops” supported by paper cuffs and set on flat baking trays – they were not airy, fluffy, butter-cream-frosted, highly decorated concoctions which require baking powders and shaped tins, both of which were developed after she was dead.

Which all only matters of course if we demand the facts, and only the historical facts, from Hollywood.

The French cook François Menon’s book “The professed cook; or the modern art of cookery, …. ” was published during Marie-Antoinette’s lifetime, so surely we can rely on his recipes to give us an accurate idea of the food of the time? I have chosen a cake recipe – naturally, but also give you a regal beef dish, in case you should wish to have a more complete meal in her honour (although to do that properly, you would have to have an awful lot more dishes – see the link below to an earlier posting which includes a menu from the Trianon).

The recipes are taken from the 1769 English translation of the book.

Aloyau à la Dauphine. Surloin Dauphine Fashion.
Take a Surloin thoroughly bon’d, make a Hole in the middle large enough to put in it a Salpicon, viz. Stuffing after this Manner, cut in pretty large Bits Pieces of Ham raw, a Fowl bon’d, two scalded Sweet Breads, a Tongue, all minced together and chop’t Parsley, a Garlick Clove, Mushrooms, Salt and Pepper, rasped Lard, Laurel and Thyme, four Yolks of Eggs; put it in the Beef and secure it well, boil it in a Pot near to its Bigness in a little Broth, a Bottle of white Wine, a large Nosegay, three Cloves, a Laurel Leaf, six Tarragon Leafs, three or four Onions, a few Roots, finish on a slow Fire; serve it upon a Sauce à l’Espagnole.

Gateaux d’Amandes. Almond Cake.
Take half a Pound of Flour, half a Pound of pounded sweet Almonds, and five or six bitter with it, half a Pound of Sugar, six Eggs, and work it well all together; form it into a Cake; bake it on a sheet of Paper, well buttered; when cold, glaze it with a white Sugar-glaze: another Method for the same Sorts of Cakes; bake it in a Mould, or Baking-hoop; pound a Pound of sweet Almonds very fine, and one Dozen of bitter ditto, putting Whites of Eggs, to hinder them from turning to Oil; then put to it half a Pound of fine Sugar-powder by Degrees, two whole Eggs, Lemon-peel, finely chopped or rasped; when this is properly mixed, add eight Eggs, the Yolks and Whites first beat up separately; stir it, and mix it all properly; and pour it in the Mould, to bake about an Hour: serve in its natural Colour.

See a menu from the Trianon at "Dining with Marie-Antoinette", with two more recipes from M.Menon's book.

The story for November 2nd 2005 was "An Old Take on Seafood Extender."

In France, cooking is a serious art form and a national sport. Julia Child.

Dont Forget to enter the QUIZ!

You have a chance to win a charming book on Queensland's culinary history. Scroll down or go to the post HERE.
Posted by The Old Foodie at 5:34 AM