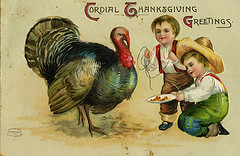 It must have been the clear bouillon that made the diet difference.

From the New York Times:
WHITE HOUSE MENU GUARDS WAISTLINE.
The White House announced today an ample menu for the Thanksgiving dinner which President Truman will sandwich in between two diplomatic dinners, but he’s still dieting.

The continued waistline-reduction regime is on the authority of Mrs. Mary E. Sharpe, White House housekeeper, who counts the Presidential calories. She declined to elaborate other than to say: “When I make up menus I keep it in mind.”

President Kennedy and his family dined at the home of his father, Joseph P. Kennedy in Nantucket Sound on Thanksgiving Day in 1961. There were 33 at dinner, and the menu was: