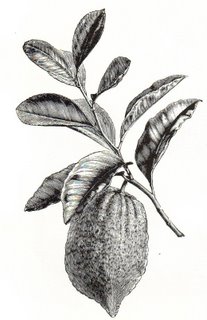 The Queensland Daily Guardian featured a recipe for preserved lemon juice on this day in 1866.

To Preserve Lemon Juice for a Voyage.
Select only the best, freshest lemons. Squeeze them well through a strainer. To every 1 qt. of juice add 1 oz. cream of tartar. Let it stand 3 days, (stirring it frequently) and then filter it through thin muslin pinned tightly on the bottom of a sieve. Put it into bottles, filling up the neck of each bottle with a little of the best olive oil. Cork tightly, then seal. When you open a bottle avoid shaking it, and carefully pour off the olive oil that is on top of the lemon juice.

Lemons are unique amongst fruits – they are so versatile that they are indispensable in every half-decent kitchen, yet they are never eaten in the hand, in the form that they come off the tree. Certainly the whole lemon may be cut up and cooked in marmalade or pickles, but it is the juice that is its most valuable asset. The “recipe” given above is hardly a recipe at all, it is simply a way of preserving the juice by excluding the air, making it particularly valuable on long voyages to help prevent the dreaded scurvy.

We now know that scurvy is caused by lack of Vitamin C, but long before this was common scientific knowledge, lemons were credited with a variety of health benefits. William Salmon’s ‘The family dictionary: or, household companion … ’ (1705) says:

“ … the Juice of them is taken with Success in all hot Diseases: it likewise (if mixed with a little unslack’d Lime) cureth the Itch, cleaneth Spots, and destroyeth Worms in the outer-part of the Body, in the Nose, or parts of the Face, Nose &c. where they many times appear with their black Heads, even with the Skin like grains of Gunpowder: their Juice only takes away Pimples, and Redness in the Face; and if made into a Syrup with fine Sugar, it kills Worms in the Belly: it is given with Success in all Fevers.”

Perhaps the scarcity of Worms in the outer-parts of our bodies today is due to the diligent administration of lemon juice by several centuries-worth of mothers. A major problem with lemon juice is that it is notoriously puckering, so it is lucky that one day a mother realised that a spoonful of sugar would make the medicine go down without screams (I have no proof, but I am certain it was a mother who did this). The invention of lemonade was before William Salmon’s time, for he included several variations in his manual.

Water called Limonade.
A very good sort of Limonade may be prepar’d by allowing three Limons to a quart of water, with a quarter of a pound of Sugar; and these ingredients may be proportionalby augmented, according to the quantity design’d. After having squeezed out the Juice of your Fruit into the water, leave the Pulp and Seeds to infuse for a considerable time; then press the Limon, Pulp, and Peel, strain the Liquor and set it by to cool.

Medical ideas develop, and mothers must add nutritional value, so before too long there was “milk lemonade” and “egg lemonade” for invalids.

Grown-ups soon realised that a different sort of value could be added, and no doubt many of them over the aeons have claimed a health benefit from their alcoholic lemon juice of choice. Here are two for you to choose from.

Lemon Wine.
To 4 ½ gallons of water allow the pulp of 50 lemons, the rind of 25, 16 lbs. of loaf sugar, ½ oz. of isinglass, 1 bottle of brandy.
Peel and slice the lemons, but use only the rind of 25 of them, and put them into the cold water. Let it stand 8 or 9 days, squeezing the lemons well every day; then strain the water off and put it into a cask with the sugar. Let it work some time, and when it has ceased working, put in the isinglass. Stop the cask down; in about six months put in the brandy and bottle the wine off.
Seasonable - The best time to make this is in January or February, when lemons are best and cheapest.
[Mrs Beeton’s “Book of Household Management” (1861)]

Lemon Liquor.
Infuse the thin rind of two large, fresh lemons in a pint of rectified spirits of wine, for ten days. At the end of that time, strain, and mix with it the juice of the lemons and a syrup made by boiling half a pound of refined sugar in a pint of water for five minutes. Pour the liquor into bottles, cork securely, and tie bladder over the corks. Probable cost, 5d., exclusive of the spirit. Sufficient for a little more than a quart of liquor.
[Cassell’s Dictionary of Cookery, 1870’s]

Now you have plenty of ideas for that glut of lemons.

“Green Butter and the Art of Sandwiches” was the story on November 24th 2005.

50 lemons are a burden for 1 person, but they are treasures for 50 people. Anon
Posted by The Old Foodie at 5:03 AM

This is very interesting! I make my own lemon extract by putting thin strips of lemon zest (no white) into a bottle of vodka - about 2 lemons' worth. Let sit for 15 days, shaking every day, then strain out the old zest and put in new. Another 15 days, and the taste of the stuff is amazing.

Hello Nene - Wow! that sound fantastic, I'm definitely going to make some of that. I managed to buy some superb quality but very cheap vanilla beans at the Farmers Market and I'm going to make some vanilla essence too. What do you think?

The Italians have a lemon flavored drink (can't remember it's name). Do you think, nene, that this is what you make? It is said to be quite good.

Yes, Limoncello is an Italian lemon liquer which makes, btw, an excellent ice cream flavoring. Yum! What I make is lemon extract; by macerating the peel in vodka, it extracts the essential flavoring oils of the lemon. You can do the same trick with grapefruit, lime and orange, any citrus fruit that you can zest.

For vanilla extract, I prefer to use bourbon. Cut your pods in half, put them in a bottle, cover with bourbon. Let it steep in a dark place for a month, shaking every now and then. Now pour this off into another bottle along with a piece of vanilla bean. This is for cooking. Then start another batch in the other bottle. This is miles better than the stuff you get in grocery stores!