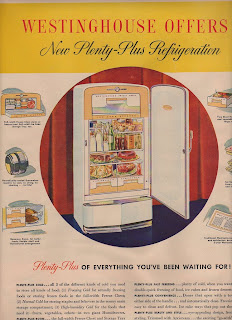 The role models for two generations of American housewives were both called Betty. One was born on this day in 1916. She was called Betty Furness, and she grew up to become an actress with the face that launched millions of Westinghouse refrigerators in the 1950’s.

The other was never born at all. She was Betty Crocker, and she was a purely fictional character born in the marketing department of General Mills in the 1920’s. Not being real did not stop Betty Crocker from answering cooking questions, having a face (many of them over time, modified and adapted to suit changing ideas of feminine desirability, demographics, and political correctness), writing cookbooks, or appearing on radio (she required actresses to perform this function for her). It also did not – most surprisingly of all – prevent her from at one time being voted the second most famous woman in the United States after Eleanor Roosevelt.

The real Betty (Furness) had a much harder life, having only one real one to work with. She apparently said that the secret of her success was that she never turned down a job, and she ended up with quite a number. In a twist on the usual “become a celebrity and get to promote a product” routine, Betty started out as an actress, got to be in a Westinghouse advertisement which made her a celebrity, which enabled her to have her own TV show and become a well-respected consumer advocate. Naturally she also wrote a cookbook.

The Westinghouse Cookbook is pure, unadulterated 1950’s. Here is a sample of its delights, to throw you into retro-bliss (I did not include the pear and grape salad using very convenient canned pears. Sorry.)

To Prepare the Shells.
Select perfect grapefruits that are clean and free from blemishes.
Wash and cut slice from top of each. Remove inside if fruit with teaspoon, being careful not to break shell. Cover shells with cold salted water (1 teaspoon salt to each quart water), bring to boil, and cook five minutes. Drain, cover again with fresh water and boil five minutes. Repeat process about three times until bitter flavor is gone from peel and peel is tender, but not tender enough to break apart. Invert shells and drain on a wire rack for at least an hour, preferably overnight.

Syrup for 10 to 12 Shells
There must be enough syrup to cover and float the fruit. Cook the shells in syrup until syrup gives a jelly test (about 250F.). Let shells stand in syrup overnight, or longer. Reheat and cook 10 minutes. Cool in syrup until ready to use. Drain before filling with cake mixture. Use any fruit cake batter to fill shells. Fill shells about 3/4 full.

To Cook the Cakes in Candied Shells
team about 1 ½ hours. This may be done on top if the range, in the oven or the roaster. (Place filled grapefruit shells on Lift-Out Rack in Inset Pan of Roaster-Oven. Pour 2 quarts of water in bottom of Inset Pan, set control at 300F., for ½ hour, or until center of cake is done when tested with a toothpick. Cool. Store in a covered container. If the confection seems dry, place a fresh orange in the container for a day or two. If properly stored, this confection will keep for a year. Serve by slicing through peel, either crosswise or lengthwise.

The story on this day last year was about the wonderful food city of San Francisco.

What butter and whiskey will not cure, there is no cure for. Irish proverb
Posted by The Old Foodie at 5:46 AM

Butter and whiskey - hah! Isn't that a drink in of itself, hot buttered whiskey?

My father was Lebanese so I learned that olive oil and a few weeds like wild marjoram and mallow will cure everything; grandma also used holy water. My uncle however says that arak is a must - so maybe the Lebanese version of this proverb is olive oil and arak.

Hello Leila - thanks for finding and enjoying my blog. I am now a fan of yours. I love it that you had roast beef and Yorkshire pud at New Year!

Interesting information on the whole "Betty" history, and good recipes to boot :) I like it!
Matt

Thanks Matt - history gets to be more fun every day!