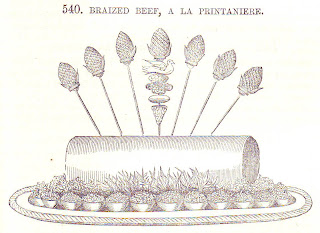 Queen Victoria was at her favourite home of Osborne, on the Isle of Wight on this day in 1899. She was a few months shy of her 80th birthday, and this is what was on the menu for luncheon:
Potage aux huitres.
Oeufs brouilles aux truffes.
Côtelletes de Veau à l’Allemande.
Poulets decoupés à l’Anglaise.
Boeuf braise au Macaroni.
Faisans à la Casserole.
Chicorée à la crème.
Poulets rôtis.

Soufflés à la Circassienne.
Crème de Pêches à la Montreuil.
Petits Gâteaux Condés
Some of Her Majesty’s subjects who had the misfortune to be residents of a workhouse on this exact Tuesday in 1899 had, for their midday (main) meal:
Vegetable broth
Bread 4 oz
Cheese 2 oz
Dumplings 8 oz
Did the Good Queen agonise over this difference while she picked and nibbled her way around her lunch (did she have all her own teeth by then)?. It seems unlikely, but perhaps I am being uncharitable.

History has not usually seen fit to record the names of the individuals who functioned as cooks in the workhouses, and I don’t know who was the Good Queen’s chef in 1899 – perhaps some other historian can enlighten me. Her best known chef however – although he was in the role for less than a year - was the Anglo-Italian, Charles Elmé Francatelli. He left her service in 1842, so was not responsible for today’s menu, but food fashions did not change quickly during the Victorian regime, and we can be fairly confident that the dishes in his book The Modern Cook, published in 1860 would still have been the standard in 1899.
Francatelli gives a selection of braised beef dishes, all variations on the following theme:

Braised Roll of Beef, a la Flamande.
Take a piece of sirloin of beef, well covered with fat, weighing about twenty pounds; bone it, leaving the fillet adhering to the upper part; daube or interlard the fillet in a slanting position, by inserting with a large daubing needle some pieces of ham or bacon about a quarter of an inch square and four inches long; then roll the beef up close, and fasten it round with a string so as to secure its shape. Break up the bones and place them with the trimmings at the bottom of a braizing pan; then place the roll of beef on the bones, and garnish with four carrots, four onions, with a clove stuck in each, four heads of celery, and a faggot of parsley with thyme and a bay leaf, and two blades of mace; moisten with half a bottle of sherry and two glasses of brandy; set the whole on the stove to simmer for about ten minutes, then add a sufficient quantity of good stock or consommé, nearly to cover the beef; place thereon a well-buttered paper, and, after having caused it to boil, set the braizing pan to continue gently boiling on a smothered stove for about five or six hours: the time for this must be regulated by the degree of tenderness of the meat. When the beef is done, drain, trim, and put it into a convenient-sized pan, containing a little of the liquor in which it has been braized; and with a portion of the remaining part, work some brown sauce for the remove; boil the rest down, and with this glaze the beef. Place it on a dish, garnish round with alternate groups of turned and glazed carrots and turnips, glazed onions, and Brussels-sprouts; pour the sauce above alluded to round the dish, glaze the beef, and send to table.

A Previous Story for this Day …
Popeye and Spinach.

We have previously looked at the menu for Queen Victoria’s Christmas Dinner in 1899.

And now, dear Lord, I cannot wait/ Because I have a luncheon date. John Betjeman
Posted by The Old Foodie at 5:26 AM

Wow! that sounds delicious :) what a great site, never even thought about vintage cooking before...very interesting