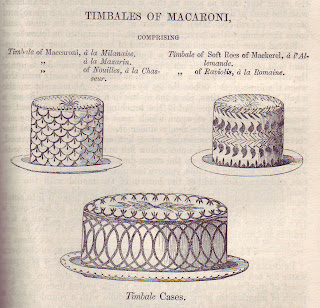 The movie ‘Big Night’ opened on this day in 1996 at the Sundance Film Festival. The story is about two Italian-American brothers who stage a final ‘Big Night’ at their restaurant, in a wonderfully defiant gesture in the face of imminent closure forced by the competition from the slick operators across the street.

The real star of the movie is the pièce de résistance of the meal – a giant timpano or timbale. A ‘timbal’ used to mean a kettle drum, but sometime, somewhere, some chef co-opted the name for ‘a dish made of finely minced meat, fish, or other ingredients, cooked in a crust of paste or in a mould.’ The mould being, of course, in the shape of a kettle drum.

The brothers could have made individual timbales for each guest, it would have been an easier and safer decision, but easier and safer options were not being celebrated this night. A single large timpano - in spite of the inherent risks in its construction (getting the layers of filling right), cooking (what if it was not cooked through?) and especially its turning out of the mould (would the unthinkable happen?) – was the only option. A single timpano was crafted with skill and care and patience - large enough to share with friends, lovers, and families - a dish that celebrated heritage and culture and joy, a grand creation that symbolised everything that the brother’s restaurant was, and the opposition restaurant wasn’t.

The essential feature of a timpano/timbale, as we have said, is its shape. The filling may be as varied as the circumstances and whim of the cook allow, and the lining of the mould – the OED definition above, notwithstanding – is not always of dough. Certainly the Big Night brothers used pasta, and in the image above (from one of Francatelli’s books), several are made with macaroni - arranged in intricate patterns as one would expect from a high-class Victorian chef - but another also uses mackerel roe. There are other choices too, as we will see from our recipe example, which is from the eighteenth century. George Dalrymple uses thin slices of veal and bacon (‘lard’) in this version, but in the succeeding recipe in the book, “Pig in a Mould named as above” he uses the pig skin to line the mould.

From: The practice of modern cookery; adapted to families of distinction, as well as to those of the middling ranks of life … George Dalrymple (1781)

Timbale à la Romaine.
The Timbal is a Mould much like a Turk’s-cap for Bleaumange, &c.
Cut slices of veal very thin; put them in your mould or stew-pan, upon slices of lard; baste them with eggs to make them join together; make a good forced-meat of veal or poultry, bread-crumbs soaked in cream, udder, rasped lard or butter, chopt parsley, shallots, mushrooms, pepper and salt, and two or three eggs; lay some of this forced meat upon the veal, then a ragoust of pigeons, sweet breads, palates, cockscombs &c cover it over with the remainder of the forced meat and lard; bake it in the oven; when done, turn it out upon the dish you intend for table, take off the lard, and serve with sharp sauce. If lard, meaning bacon, is disagreeable, rub your mould or pan well with butter, which will answer the same purpose.

Lobster Thermidor was discussed in A Revolutionary Dish.
Quotation for the Day …

The chef, or cook, proportions, assembles, and prepares various products of the animal, vegetable, and mineral kingdoms, creating food for the epicure. The aesthetic pleasure induced by food can be so closely related to that produced by certain music and other arts, as to defy separation or separate identification. Merle Armitage in ‘Fit For A King’ (1937)
Posted by The Old Foodie at 5:32 AM

I loved that movie.

I loved that movie too! I remember many of its scenes. Great post, Janet!

Hello Barbara and Sally - I just love the love in that movie. I must watch it again soon. I dont think I'm brave enough to make a timpano to have for dinner first though.